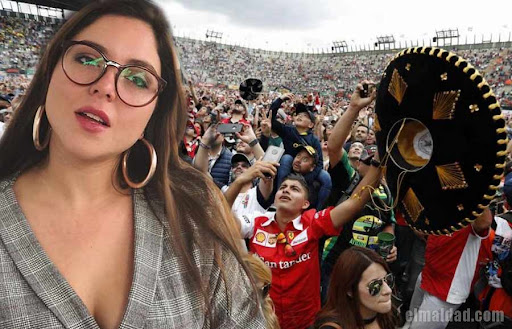 The activist and host was criticized on social networks for her comments against the Mexican Grand Prix, after stating that it only gives access to the elite and white people.

Estefania Veloz a Morenista and also known as #LadyPigmentocracia

In her Twitter account, the also television host and political analyst stated that the Formula 1 event only gives access to the country’s upper class, “which is obviously white. “

“I hold my opinion on Formula 1 and the pigmentocracy. It is a frivolous event that only the elite of the country which is evidently white has access,” he wrote.

In the same publication, users of social networks answered that several of them went to the event and do not belong to the upper class or are white, while others showed them Mario Delgado, the national president of Morena, at the event.

While others indicated that their comment was correct and several more assured that the event was boring.

According to the Ministry of Tourism of the government of Mexico, during the three days of the event, the arrival of 188 thousand national and foreign tourists in the capital of the country was reported.

In addition, it achieved a hotel occupancy throughout the city of 63.7 percent, while in the areas near the Autodromo it reached 97 percent and registered the arrival of 188 thousand national and foreign tourists in the capital of the country, according to the Secretariat of Tourism of the government of Mexico.

In making a breakdown of the spill, the agency explained that:

According to the organizers of Formula 1, during the weekend 372 thousand fans came to the Autodromo Hermanos Rodríguez to witness the car races, where, among others, the Mexican driver Sergio “Checo” Pérez participated.

The authority estimated that the spill generated by tourist services (2,183 million pesos) is equivalent to the income for one year of 75 percent of the workers currently registered in accommodation services at the Mexican Institute of Social Security.

And in the case of the spill generated by lodging (192.1 million pesos) is equivalent to the rent of 137 thousand rooms per night in hotels in Mexico City.