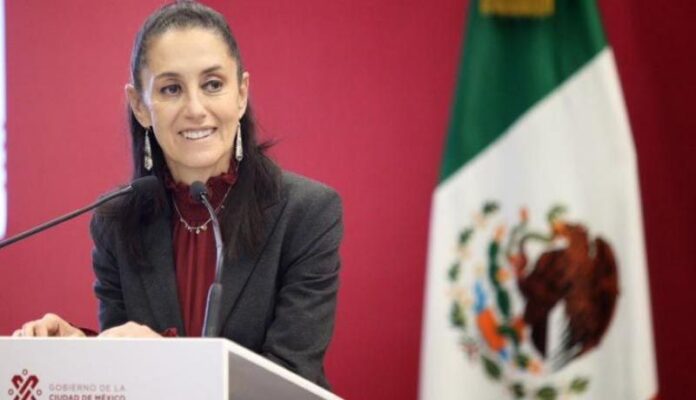 The Head of Government pointed out that there have been candidates for the presidency of Mexico for a long time, but that currently, it is not only a gender issue, but it is also supporting the project of President Andrés Manuel López Obrador

When attending the protest of Indira Vizcaíno as governor of Colima, the Mayor of Mexico City, Claudia Sheinbaum, said that the country has long been prepared for a woman president and that it is essential to give continuity to the Fourth Transformation.

In an interview, the capital president pointed out that there have long been candidates for the presidency of Mexico, but that currently, it is not only a gender issue, but it is also supporting the project of the President of the Republic, Andrés Manuel López Obrador.

“Do you think that a woman should already rule the country? Claudia Sheinbaum Pardo was questioned, she replied:” Yes,

“For a long time there have been many candidates for presidents of the Republic, but today, it is not only a matter of gender, which is important but also the continuity of this Fourth Transformation that is fundamental… the direction of Mexico is a great moment and there is to give continuity and all our support to the President of the Republic ”.

Who is Claudia Sheinbaum

Scientist, feminist and leftist. This 59-year-old woman who rules the Mexico City of 21 million inhabitants.

The first woman elected as mayor of the huge metropolis assumes her mandate on behalf of Morena, the ruling party.

Although she is not the first woman in absolute terms (before her, Rosario Robles held the position on an interim basis between 1999 and 2000), she is the first to become mayor through popular vote.

At 59 years old and with a rather sober style – she is rarely seen smiling at a public event that she almost always attends in a pair of jeans, a white shirt, and a scarf around her neck – Sheinbaum does not meet the stereotypes of the average politician.

Born into a Jewish family in a predominantly Catholic country – her grandparents emigrated from Lithuania and Bulgaria – Sheinbaum nonetheless received a secular education.

His father Carlos Sheinbaum Yoselevitz was a chemical engineer, whose Ashkenazi family came from Lithuania to Mexico in the 1920s when Jewish migration to our country began to increase considerably. Claudia Sheinbaum’s grandfather was a jewelry merchant who in Mexico was involved in the activities of the Mexican Communist Party. And in the Sheinbaum home, daily life was conducted in Yiddish, with Ashkenazi dishes and observance of the Jewish major holidays.

For her part, her mother, the renowned scientist Annie Pardo Cemo, comes from a Sephardic family originally from the city of Sofia in Bulgaria, which arrived in Mexico in the 1940s fleeing the Holocaust. Annie Pardo took classes at a Jewish school and later studied biology at UNAM, later making a milestone by becoming the first Sephardic to enter the Mexican academy.

And her first passion, like that of her parents, was not politics but science: she studied physics and energy engineering at UNAM, obtained a doctorate at the Lawrence Berkeley National Laboratory, in California, United States, and was a member of the Panel UN Intergovernmental Expert on Climate Change (IPCC), the team that won the Nobel Peace Prize in 2007.

However, her interest in science has not prevented her from developing her political career.

This woman, who claims to write her own speeches and is cautious when presenting her proposals, has been linked for years with left-wing politicians and with the president of Mexico, Andrés Manuel López Obrador.

Sheinbaum was his Secretary of the Environment when AMLO was mayor of the city in 2000.

In 2012, López Obrador, who was again a presidential candidate, proposed her as a possible head of the same agency, but at the federal level.

Sheinbaum was also one of the first politicians to leave Mexico’s traditional left-wing party, PRD (Party of the Democratic Revolution), and join AMLO when she formally launched her Morena party, in 2014.

And, in 2015, she assumed the reins of Tlalpan, one of the 16 sectors that make up Mexico City.

It was her performance as a delegate of this sector (between 2015 and 2017) that generated a great controversy around her.

Her actions were criticized, especially after the 7.1 magnitude earthquake in September 2017, which left more than 300 dead and severely affected the municipality Tlalpan.

Among the victims were 19 children and seven adults who lost their lives when the Rébsamen school collapsed.

Many residents of the area consider her directly responsible for what happened since the officials in her charge approved the dubious construction permits for the building that collapsed on top of the school.

Sheinbaum denied the allegations and singled out her rivals during her campaign of using the Rébsamen college tragedy for political ends.

During her years in the University Student Council (CEU) -which fought among other things to improve the academic quality of professors and researchers- she met the student leader Carlos Imaz with whom she was married between 1987 and 2016. They had two children.

Her ex-husband, a well-known figure on the left, fell from grace after being caught up in a corruption scandal.

Claudia Sheinbaum was chosen by the BBC as one of the 100 most inspiring and influential women in the world.