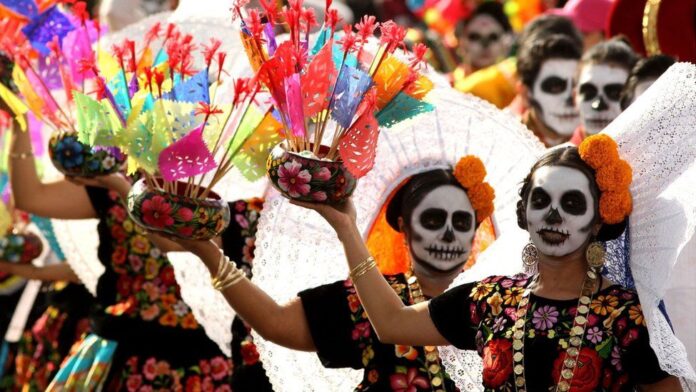 Giant skeletons, colorful costumes, mariachi music and dancers filled downtown Mexico City on Sunday as the Day of the Dead parade returned for the first time since the pandemic began.

Thousands of people, including locals and tourists, lined the route through the capital for a glimpse of the procession, which was canceled last year due to the coronavirus.

Thousands of people lined the route in Mexico City for a glimpse of the Day of the Dead procession Photo: AFP / CLAUDIO CRUZ

Like many, Yadira Altamirano came with her face painted as “Catrina,” a skeletal representation of death that has become a symbol of one of Mexico’s most important festivals.

“Last year I wanted to come, but it was canceled,” said the 38-year-old Mexican, who has lived in the United States since she was a child.

“Now we have our chance,” said Altamirano, an enthusiastic practitioner of the Day of the Dead traditions.

People take part in Mexico City’s Day of the Dead parade, which returned in 2021 for the first time since the pandemic began Photo: AFP / CLAUDIO CRUZ

“I’m the only one in my family who always puts out an altar, and we always have dinner on November 2 at midnight,” she said.

The parade began in the Zocalo, the capital’s main square, where city authorities dedicated the event to medical workers on the pandemic frontline, as well as to the victims.

While the Day of the Dead is one of Mexico’s most important festivals, the parade itself was inspired by the opening scene of the 2015 James Bond movie “Spectre” Photo: AFP / CLAUDIO CRUZ

But with most adults in the capital now vaccinated against the virus, and daily deaths trending lower, the authorities gave the green light for the parade to go ahead this year.

Mexican authorities dedicated the Day of the Dead event to medical workers and victims of the pandemic Photo: AFP / CLAUDIO CRUZ

“It feels great, although of course with the proper precautions against Covid,” said Conchis Garcia, 52, who came with his family from the eastern state of Veracruz.

The dancers and floats paid tribute to Mexican culture and tradition, from street food vendors to authors, icons of cinema and the painter Frida Kahlo.

With its bright colors and cartoonish skeleton costumes, the Day of the Dead has become an internationally recognized symbol of Mexican culture.

From November 1-2, people across the country normally deck their homes, streets and relatives’ graves with flowers, candles and colorful skulls.

The festival, which in 2003 was added to the UNESCO Intangible Cultural Heritage list, centers around the belief that the living and the dead can commune during a brief period.

The street procession is a relatively recent addition to the celebrations.

In the movie, the British agent played by Daniel Craig goes after a bad guy through a parade featuring giant skeletons floating among people dancing with their faces painted as skulls.

Authorities decided to recreate the procession to boost tourism.

Last year, it was canceled as the government urged people to stay at home to avoid spreading the coronavirus, and many graveyards were shut to prevent crowds gathering.