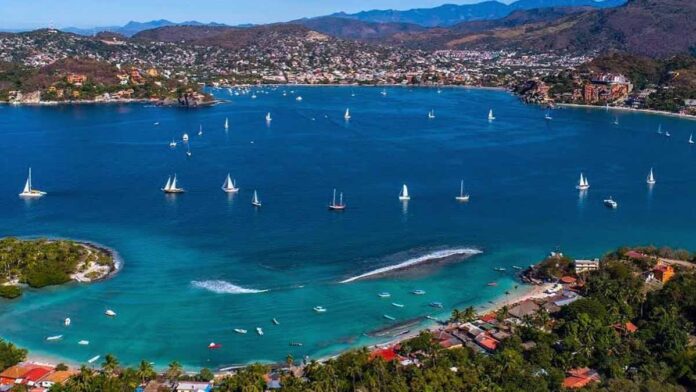 As part of the development of actions for the tourist reactivation of Ixtapa Zihuatanejo, the Convention and Visitors Bureau carried out a promotional caravan through Mexico City during the week of October 25 to 28 by the hand of four commercial partners of the destination: MPI Mexico, Aeroméxico, Volaris, and VivaAerobus Chapter to train more than 230 travel agents and meeting planners.

This caravan of promotion by Mexico City was joined by the participation of 14 hotels of the destination who together made a series of presentations, to publicize the attractions and characteristics that distinguish Ixtapa Zihuatanejo. With this, it is expected to create ties with travel agents and that they highlight the benefits of the destination, generating new visitors to this Pacific region.

During the first day of the caravan, in conjunction with MPI Mexico Chapter, considered the largest Meetings Industry Association in Latin America with more than 200 members, it brought together 35 of the most prominent meeting planners in Mexico who showed a positive and supportive reaction. Like Ixtapa Zihuatanejo as an ideal destination for holding events, congresses, conventions, and incentive trips, meeting tourism has been one of the segments most affected by the pandemic, and today it is beginning to be strengthened again.

On this occasion, Lucy Aguilar, Aeroméxico Regional Manager, commented during her participation in the second day of the caravan that the airline will increase its daily flight frequencies from Mexico City starting in November to provide care to its travelers due to the increase in demand expected to travel to Ixtapa Zihuatanejo.

For his part, David de Alba, Volaris Executive who represented the airline at the event, announced that, as of November 1, his CDMX-Zihuatanejo flight will increase to a daily frequency, which represents excellent news for the destination.

In addition, the executive shared that from January to April 2022 he will start a new route that will connect Chicago with Ixtapa Zihuatanejo, a flight that adds to the current connection with Tijuana that operates with very good results.

Finally, VivaAerobus, through its representative Raymundo Guadarrama, the airline’s International Sales Executive, announced that it will be from October 31 when they will increase the frequencies of their flights from Mexico City to Ixtapa Zihuatanejo with practically daily operations.

These announcements confirm that, even though they are in a pandemic, important commercial partners continue to bet on Ixtapa Zihuatanejo, improving their connectivity with the country’s capital by the end of the year and thus confirming their commitment to strengthening tourism in Mexico.

For his part, Pedro Castelán Reyna, executive director of the Ixtapa Zihuatanejo Convention and Visitors Bureau, commented “we are very satisfied with what was achieved in the Mexico City caravan, with very positive responses from our travel agent friends and excellent news of the airlines, our business partners. We are very grateful that you continue to think about the destination, that you continue to bet on it, and without a doubt confirming the commitment you have to tourism in Mexico. It is very important for us to continue strengthening ties in anticipation of the winter season that will bring us an extraordinary close to the year. “

To conclude, Pedro Castelán commented that this caravan occurs by coincidence, within the framework of Hurricane “Rick” passing by the coasts of Ixtapa Zihuatanejo, which left minor damages with the fall of trees throughout the destination and some damage to the restaurant infrastructure, mainly those that are on the beach; On the other hand, all the hotels in the destination are operating normally, waiting to receive travelers to discover this paradise, this Caravan also served to inform the attendees of the events, Ixtapa Zihuatanejo is standing, he concluded.

Ixtapa Zihuatanejo is one of the main beach destinations in Mexico, in recent years it has received a series of appointments and recognitions from international organizations and specialized magazines in the tourism field, it is placed in the Top 5 of the Best Cities in Mexico in The World’s Best Awards 2021 by Travel + Leisure magazine, is a winner in the category as Mexico’s Leading Destination in the World Travel Awards 2020, winner of the Travelers’ Choice Awards 2020 in the Popular Destinations in Mexico category by Tripadvisor and is currently a Zone Humpback Whale Watching Officer.

Reliable Traveler Mexico Program and why you should enroll

“Sonora: a treasure to discover”: exhibition begins in CDMX