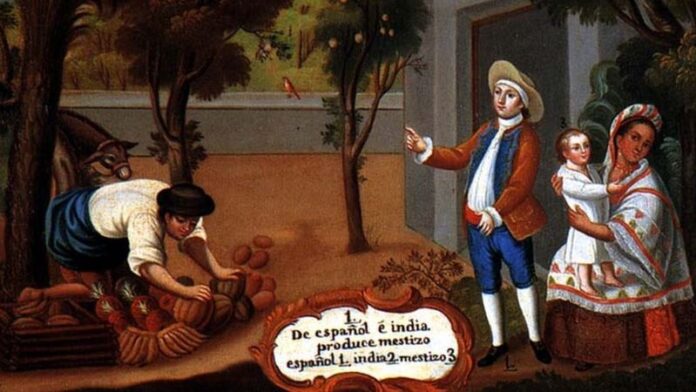 Criollos, mestizos, mulatos or saltapatrás: how the division of castes arose during the Spanish rule in America

The mestizo population is the one that predominates in most of what was the Viceroyalty of New Spain: Mexico and Central America.

A little over a century ago, in 1913, the day was established for the celebration of the union between Spain and the peoples of America.

The promoter of the Día de la Raza or Hispanic Day, the Spanish politician Faustino Rodríguez-San Pedro, said it was a tribute “to the spiritual intimacy that exists between the discovering and civilizing nation and those formed on American soil.”

But during the three centuries of the Spanish Empire in the “Indies” of America, what really ruled was a marked and very practical division of social classes.

The division was called the caste system and it functioned in the viceroyalties and territories of the Spanish crown.

“It is the order in which the Indies are governed. The Spanish conquerors do not come to work, they come to have the Indians and blacks work for them,” explains Federico Navarrete, Ph.D. in Mesoamerican Studies from the Universidad Nacional Autónoma de Mexico (UNAM).

With the discovery of America in 1492 and in the following decades of colonization, three basic social groups began to emerge :

The mixture between these groups gave rise to castes, classification of people given their lineage, who their parents were, and what place they occupied in medieval society of those centuries.

And from that mix came a curious list of 16 basic combinations, although the possible mixes are many.

There was never a limitation to the mix and even those boundaries between one group and another were blurred: “It was not a systematic classification system. The truth was not such a rigid system,” explains Navarrete.

And it could be manipulated since it was common for a son to be registered as a target so that he would have a higher status for which “the priest was bribed or a Spanish godfather was obtained,” says the researcher.

Explotation of its base

The use of all these distinctions actually has to do with a practical purpose, beyond the modern conception of the race that emerged until the early nineteenth century.

“First of all, it is a system of political and economic domination. They are not racial prejudices, because castes are not races, we must not confuse that,” explains Navarrete.

“If they received the surname of the white father and incorporated them into his family, those children counted as white, regardless of ‘race’,” adds the UNAM expert.

The indigenous people were the great population base of Americas and therefore they were the base of the economic system, mainly in the Viceroyalty of New Spain and Peru.

The whites occupied the privileged positions of the political and economic structure, while the Indians had to work and pay a tribute to the crown. Slaves only lived to work.

The exploitation of this workforce was the main objective of the colonizers. That a person was of one caste or another did not really add or subtract rights, since rather the economic and social position was the determining factor.

“The mestizos were in intermediate positions: they did not have to pay the tribute like the Indians, nor were they slaves like the blacks, but neither did they have the privileges of the Spanish,” explains Navarrete.

A sample of the caste division was produced by various artists of the time through paintings known as “caste pictures”.

“They were an elaboration of official racial policy, comfortable for anxious, or perhaps unconscious patron elites,” writes the American historian William Taylor.

However, Navarrete points out that in reality, they were a kind of souvenir, since the New Spain population “was always moving” between one caste and another.

On a day-to-day basis, the color of the skin was not as decisive as the language that was spoken, the clothes that were worn, and the social status.

“An Indian who had lighter skin, who dressed like Spanish and spoke Spanish, could pass for mestizo and even white,” explains Navarrete, so that the complexion was not so decisive.

Even among whites, there was classism since peninsular people had better positions than those born in America.

And at that time it was ignored that the skin came from genetic inheritance and it was even believed that diet determined skin color.

Does the Caste system still exist?

For Navarrete, the class division system “was a brutally unjust system,” since it marked a very clear hierarchy between the different groups, with discrimination and disadvantages for those who were not white.

The independence of the nations of America ended the caste system, but the researcher questions whether this division disappeared.

“In almost all the independent republics the caste system was maintained in one way or another,” says Navarrete.

” The Indians and blacks across America continue to occupy positions very clear disadvantage compared to whites. In the background is still a continuation of the Casta system”.

Carnitas, among the best traditional dishes in the world of 2022