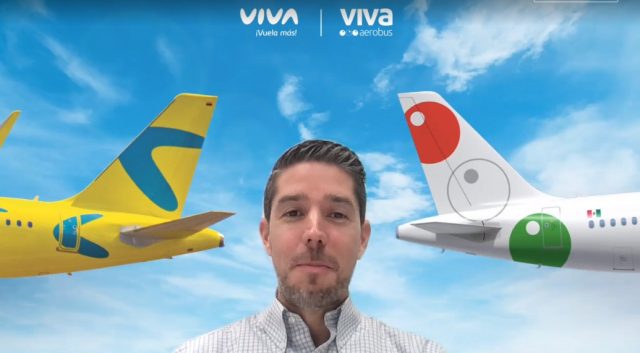 Viva Aerobús, owned by the Mexican businessman Roberto Alcántara Rojas, announced this Thursday that following Volaris it will also operate in the New Felipe Ángeles International Airport (AIFA) that the government of Mexico is building on the land occupied by the Santa Lucía Air Base in Tecámac and Zumpango.

The government of President Andrés Manuel López Obrador (AMLO) managed to attract airlines to the airport that it promotes since it will charge an Airport Use Fee, the famous TUA, much lower, of 120 pesos per passenger, than in Mexico City, which is 570 pesos, thus encouraging a kind of subsidy after no airline had scheduled flights in the new facility, as revealed by REPORTUR.mx.

The lower rate will reduce the price of the plane ticket for the simple fact of traveling from the Felipe Ángeles, which will have the cheapest rate of all the airports in the country. Even the cheapest ones such as Campeche, Ciudad del Carmen, Ciudad Obregón or Tepic are more expensive: they charge 211 pesos compared to the 120 pesos of Felipe Ángeles

There will be two types of airports: the fifís and the Welfare fliers, which are cheaper. Among the fifís will be the Mexico City International Airport, which with its TUA of 570 pesos, according to money, will be almost four times more expensive than the Felipe Ángeles, or the Toluca will have a TUA of 372 pesos per passenger, being at triple of Felipe Ángeles.

The director of the airline, Juan Carlos Zuazua, reported the above during the signing of another interline agreement with Viva Air, from Colombia. He pointed out that now they are only waiting for the government headed by Andrés Manuel López Obrador to publish the rates for the operation in the AIFA, because with this information the airline will be able to define the routes that will operate from this new air terminal.

The owner of Viva Aerobús is one of the most successful Mexican businessmen and his growth in the business world has been closely linked to the Mexican political class. His father, Jesús Alcántara Miranda was a prominent PRI member of the northern area and even became municipal president of Acambay. The auditorium of the State Committee of the PRI in the State of Mexico bears his name.

Roberto Alcántara, according to planamayor, has made passenger transport an emporium, first with motor transport lines such as Flecha Roja, Caminante and ETN and now with Viva Aerobús.

The Alcántara Rojas family also acquired a bank, when in the administration of Carlos Salinas de Gortari, the banks were privatized. However, their experience with Bancrecer was not entirely good, as it did not survive the financial crisis of 1994, therefore that the credit institution had to be rescued by Fobaproa.

Viva Air, the Low-Cost airline with operations in Colombia and Peru, and Viva Aerobus, its counterpart in Mexico, also signed the first interline agreement between two companies with a business model – Low Cost – in Latin America to offer their passengers more options flight between Mexico and Colombia.

Thanks to this agreement, passengers will be able to purchase tickets to fly the Bogotá – Mexico City route from the website or applications of either of the two airlines with access to the itineraries of both Viva Air and Viva Aerobus and thus combine their route with the most convenient option.

Depending on the traveler’s preference, he may, for example, make his outward journey through Viva Air and back through Viva Aerobus, or vice versa.

With this alliance, travelers now have more schedule options to benefit their comfort and under a value proposition, from both airlines, which is characterized, according to both, by prioritizing biosecurity, punctuality, and customer focus. , low prices and tailor-made flights. The business model of these two airlines allows them to offer passengers economical options – Base Fare from Viva Air and Zero Fare from Viva Aerobus – and the possibility of customizing the flight by adding the additional services they require, thus paying only for what they really need.

Félix Antelo, CEO and president of Viva Air, highlighted that this alliance is not only the achievement of the first interline agreement between two Low-Cost airlines in the region. “We are building the region, strengthening our presence in the market and contributing to the economic revitalization. The two airlines ensure air inclusion and allow more and more people to have the opportunity to fly more, to more destinations, in this case between Colombia and Mexico ”, he stated.

For his part, Juan Carlos Zuazua, CEO of Viva Aerobus, pointed out that this agreement is being held at a strategic moment to boost the commercial and tourist potential between Colombia and Mexico, making a wide range of options available to passengers. Added to this is an operation with two of the most modern fleets in America with cutting-edge technology from the European manufacturer Airbus. On the one hand, Viva Air’s aircraft make up the youngest fleet in Colombia and the third in South America; On the other hand, the Viva Aerobus fleet is positioned as the youngest in Mexico and the second in North America.

“Viva Aerobus has revolutionized the way of traveling by plane in Mexico, and with this agreement with Viva Air we will improve the offer of our flights to Bogotá, with great customer service, and more importantly offering the lowest prices since we operate models of ultra low-cost business, always taking care of the economy of our passengers ”,  Zuazua.

In the second phase of this agreement, both airlines will be able to mutually enrich their offer through connecting flights that link their route portfolios. In this way, Colombian passengers will be able to access the entire network of Viva Aerobus destinations in Mexico and the United States, and Mexican travelers can take advantage of Viva Air flights in Colombia and Peru.