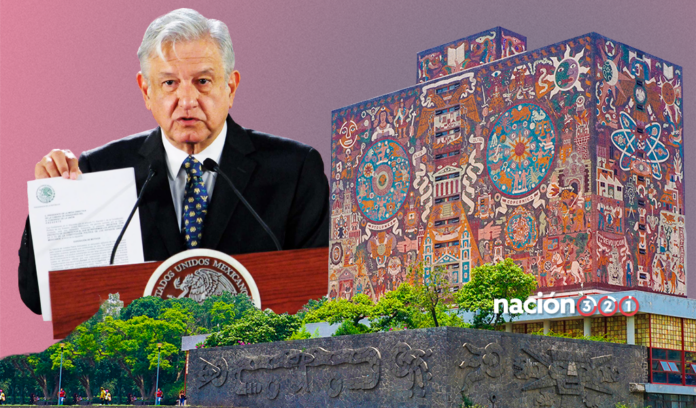 Politicians and academics criticized the words of President López Obrador, who affirmed that the UNAM has sold out to the right.

President Andrés Manuel López Obrador reiterated his criticism against the National Autonomous University of Mexico (UNAM) by pointing out that they sold out and co-opted intellectuals and academics.

After President Andrés Manuel López Obrador commented that the National Autonomous University of Mexico (UNAM) became an individualist and defender of neoliberal projects, members of the political class, doctors, and academics came out in defense of the highest house of studies.

The president of the PRI, Alejandro Moreno, expressed his support and support to the rector of the UNAM, Enrique Graue, as well as the students and alumni.

The vice-coordinator of the PAN in the Senate, Kenia López, regretted the president’s statements and launched a “that’s enough” of attacks on the University.

“He irresponsibly dared to point out to this institution that initially carries his quality and is autonomous in his name, this president will leave as they have all left, but the highest house of studies will prevail,” he said.

The vice president of the Board of Directors of the Chamber of Deputies, Santiago Creel, disapproved of the president’s statements and assured that his statements generate polarization that only suits AMLO.

“I am very sorry for the expression of the President of the Republic. In the first place, he is his alma mater as is mine (…) He does not speak well of those who speak that way about his home. In this life you have to know how to be grateful, “said the PAN, who teaches at the University.

He mentioned that polarization generates division and a head of state like López Obrador must unite Mexicans and be above their partisan views, and his current statements do not help what is happening in the country.

“The polarization of the morning has to end, the president must reflect. He’s not here to be a street fighter, that’s not his mission. If it had been, they would not have elected him president, but he is the head of the Mexican state and he is the one who should represent us all, ”he declared.

Meanwhile, the infectologist Alejandro Macias and an official of the Department of Health in the administration of the PAN Felipe Calderón considered that the federal president is wrong in his negative opinions towards the UNAM.

“It is an institution of great diversity of thought, which has been placed more and more among the best universities in Latin America, evaluated through objective measurements,” said the doctor.

The businessman and former Undersecretary of Tourism of the Federal Government, Simón Levy, considered that the highest house of studies has always defended public, social, and especially left-wing thinking.

In the same sense, the academic Javier Martín Reyes commented that the UNAM is plural and diverse.

Mexico is among the 10 wealthiest countries in the world

The F1 is a frivolous event that only gives access to white people says, Estefanía Veloz