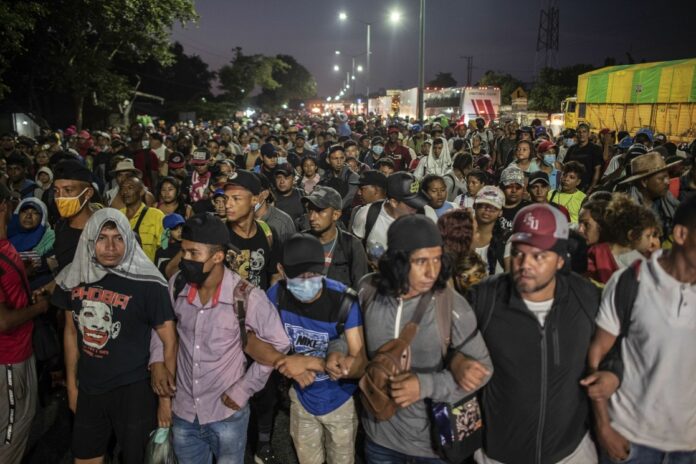 A massive and organized migrant caravan is on its way from southern Mexico toward the U.S. and has already surged past a blockade by Mexican forces attempting to stop it from getting to the U.S.-Mexico border.

Organizers say that there are now 6,000 migrants in the caravan, setting off from Tapachula, Mexico – some carrying American flags and signs with President Biden’s name. Tapachula is in the south of the country on the border with Guatemala.

The caravan is not merely a group of migrants congregating together, organizers made migrants who wished to participate in the caravan to register with a QR code on their phones or a web link to participate.

Within hours, the flood of migrants encountered a wall of Mexican interior police wearing protective gear and wielding shields. But the security did not hold, as migrants forced their way through the blockade and continued on their way to try and seek entry into the U.S. interior.

“Money is not going to solve the problem, throwing it to governments like Mexico where they put people from the south border to the northern border is not the solution,” organizer Irineo Mujica said. “They should give them papers here, they should give them the opportunity to work here.”

Human rights organizations in Mexico and Central America launched the campaign called #ProtectionNoContention whose central demand to the Mexican government, and especially to the National Migration Institute, is to put an end to “the repression, containment and deportation of people in need of protection and their right to request or regularize their immigration status is guaranteed, in accordance with national and international legislation ”.

In a statement by organizations such as it has a broad legal framework that allows people to regularize their immigration status for humanitarian reasons, temporary residence, or family reunification, in addition to the right to request asylum, not to do so is to breach their legal framework and their international obligations. .

For organizations such as the Institute for Women in Migration, the Fray Matías Human Rights Center, Asylum Access Mexico, and the Human Rights program of the Ibero-American University, during the last three years, the governments of Mexico and the United States have deployed various actions to limit the rights of migrants and asylum seekers “by militarizing Mexican immigration policy and criminalizing people who seek protection.”

The migrant caravan that advances from the state of Chiapas is this Sunday in Huehuetán, after a break in the community of Álvaro Obregón.

The group of around 4 thousand migrants seeks to reach Mexico City to present refugee and asylum applications, in addition to expressing the slowness of the system to deal with the procedures and human rights violations they have suffered while they have been in the country.

Eunice Rendón, a coordinator of Agenda Migrante, wrote that the caravan is moving slower than other groups because it is made up of a large number of children and women.

This Sunday the group also advanced amid high temperatures and solar radiation, which is why the attempt by civil society organizations to help them and prevent dehydration was reinforced.

The caravan left this Saturday morning from Tapachula, Chiapas, bound for Mexico City and it was around 10:30 a.m. when it arrived at the first filter, in which the security forces intended to detain the contingent, whose final purpose It has been for months to cross the country to reach the United States, in search of better living conditions.

Some of the caravan participants said their ultimate goal is to eventually reach the border with the United States, where the number of migrants trying to enter was already reaching new records.

The photos and videos provided by Kirén Miret this weekend show the presence of minors in the group:

We don’t want Mexico to be a migrant camp: López Obrador

The president of Mexico, Andrés Manuel López Obrador, urged this Friday to address the causes of migration “in the background” and assured that he does not want the country to become a “migrant camp.”

At the press conference at the National Palace, a journalist asked him about the possibility of the United States granting resources to Mexico to properly serve migrants at the border.

“Yes, but you have to attend to the fund; First, we do not want Mexico to be a migrant camp, “said the president after the recent migratory wave that has led thousands of people to live in poor conditions at various points along the northern and southern border.

The region has experienced an unprecedented migratory wave since the beginning of the year with a historical flow, with 147,000 undocumented persons detected in Mexico from January to August, triple that of 2020, and a record of 212,000 undocumented persons detained only in July by the Customs and Protection Office. Border (CBP) of the United States.

This last week, the situation has intensified enormously in northern Mexico with the arrival of thousands of Haitians who tried to cross from Ciudad Acuña, in the state of Coahuila, to Del Río (Texas), leaving tragic images, such as that of a Border Patrol agent apparently beating Haitian with a whip.

While in Mexico, hundreds of them are now spending the night in a makeshift camp in Ciudad Acuña, guarded by the authorities, and are torn between trying to cross to the United States or betting on seeking refuge.

Mexico is among the 10 wealthiest countries in the world

The F1 is a frivolous event that only gives access to white people says, Estefanía Veloz