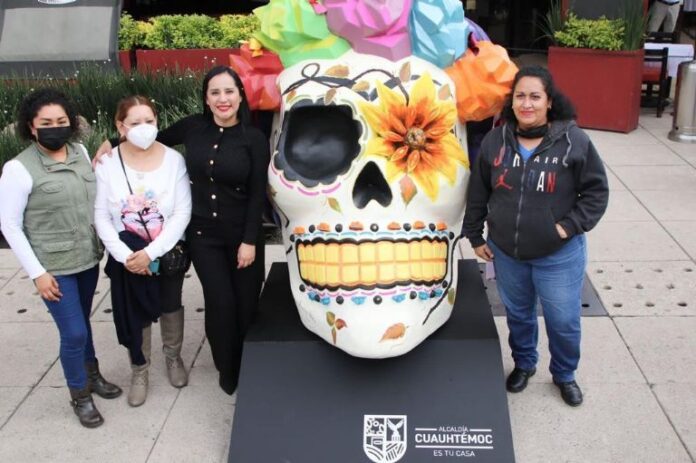 The opening ceremony took place at the Monument of the Revolution and was inaugurated by the mayor or Cuauhtémoc.

The Fridacranios exhibition, at the Monument to the Revolution, was inaugurated by the mayor of Cuauhtémoc, Sandra Cuevas. The head of the district affirmed that in Cuauhtemoc, the citizens’ resources are not misused “and much less diverted” in such a way that the cultural exhibition did not generate any expense for the government.

“All the Mexican traditions related to the last quarter of the year such as the Day of the Dead, Christmas, and New Year festivities will be reinforced in the Cuauhtémoc district because in addition to reactivating the economy, it is important to rescue our traditions”, Cuevas said.

That is why this attraction was inaugurated for the enjoyment of all those who live in Cuauhtémoc and the more than 6 million daily visitors.

“Something that I learned from civil society, is to do a lot with little, so we always look for how to make exchanges, how to bring benefits to our demarcation, how to bring help to the people without spending,” Sandra Cuevas said.

As part of this boost to the economy of the Cuauhtemoc District, on October 28, a Monumental Offering of the Day of the Dead will be held on Calle de Chile number 13, in the Historic Center in the well-known Calle de las Novias.

Accompanied by the Director of Culture, Enrique Gou, the mayor also announced that on October 29 there will be a Catrina Gala Parade with hand-painted and embroidered dresses, made in La Lagunilla and La Merced, in the Art Garden located near the Monument to the Mother.

The mayor announced the installation of three ice rinks in the month of December, as well as a pilgrimage, and the return of Santa Claus and the Three Wise Men, are also contemplated.

The 10 Frida-Skulls, which will be exhibited from October 22 to November 9, 2021, had a three-week manufacturing period. They are made with fiberglass and plaster; they went through a painting process that lasted three days in the Garden of Art, located in the vicinity of Sullivan Street.

8 artists and two collectives participated in this process. Each one has a title: “Life and a thousand cries of Frida”, “Grandmother”, “Duality of Art and Fire”, “The two faces of Frida, Life”, “Sweet Death”, “Flowering of Frida”, ” Blood color to Mexico ”,“ Alfeñique’s Skull ”,“ I paint flowers so they don’t die ”and“ In love with life ”.