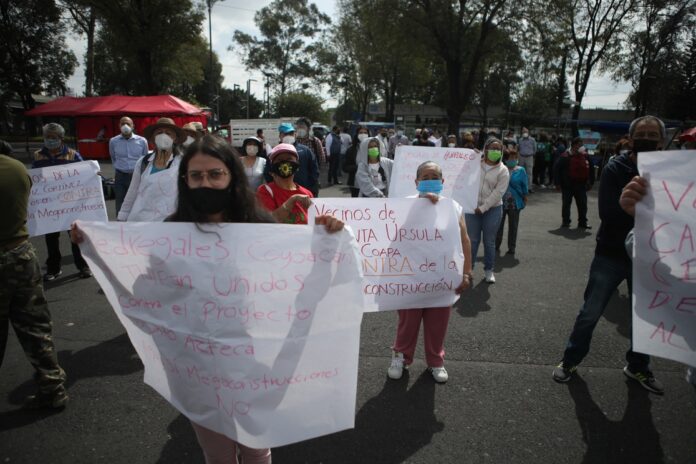 Residents of the Santa Ursula area in Mexico City said “no” to the construction of the Azteca Stadium Complex project, which includes a mega shopping center, a hotel, and parking lots, the construction of which, they affirmed, will affect the road network in the area, increase the cost of services and will cause a greater shortage of drinking water.

For the second consecutive day, residents of the area demonstrated on the esplanade of the Gran Sur shopping plaza against this work and the consultation that is being carried out to have the “citizenship approval”.

The whole idea came up as Mexico’s mythical Azteca Stadium is getting ready to host its third FIFA World Cup in 2026.

“It is a totally unfeasible project because the inhabitants are fighting for their right to decent housing, while the corporations involved seek nothing but commercial profit,” said one of the protesters.

Members of the Neighborhood Assembly against Mega Construcciones Tlalpan and Coyoacán denounced that allowing a real estate development of this nature to be built in an area saturated with services means the enrichment of large capitals.

“This, at the cost of the quality of life of the people who live in 20 neighborhoods surrounding the so-called Santa Úrsula Colossus, those who seek to “convince” with a neighborhood consultation process with “severe methodological flaws by confusing streets and neighborhoods,” the resident stated.

“They are looking to build a work that will require thousands of cubic meters of water to cover their needs when the liquid is scarce in areas such as Los Pedregales, and there are also serious mobility problems in this part of the city”, he continued.

“It is a real estate development that “monopolizes services and negotiates with the most pressing needs of the settlers”, who will have to pay more for services such as water, electricity, and property, although there will be a greater shortage of liquid and the drainage will be saturated”, the man added.

“Crime, which is pretty bad here already, will most likely increase”, he stressed.

With banners and signs that read “No to the Azteca Stadium Project“, “We Pedregales say No to the project”, “Neighbors united we will win“, they expressed their rejection and called on the population to join the protest.

They also demonstrated against the neighborhood consultation that began on October 11th so that they know and endorse this project that is expected to be built on Avenida Estadio Azteca 42, Pueblo Santa Úrsula Coapa neighborhood, in Coyoacán District, Mexico City.

The construction includes two blocks where the shopping center, a hotel will be located, and on Calzada de Tlalpan 3475 the continuation of the center will be developed and a three-story double-height building, where the vehicular access ramps to the Azteca Stadium Complex will be located.