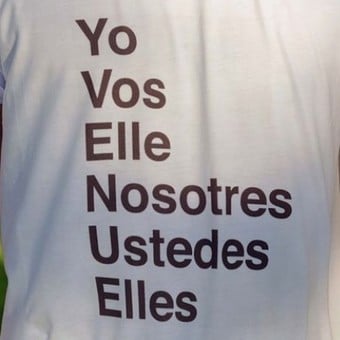 In a new episode in the controversy over inclusive language, the Royal Spanish Academy has launched a strong message about its position on the subject. For the RAE, the cultural institution dedicated to linguistic regularization among the Spanish-speaking world, the door is closed for words such as “compaere” or “elle”.

Our language is already inclusive

The RAE Twitter account has been characterized by constantly interacting with its followers and by answering many questions related to language. Most of them are made under the famous hashtag #dudaRAE On this occasion, within the debate by the famous colleague, a user, Claudio Ruiz, sent the following question: “Hi RAE, I have a question, this famous inclusive language is gibberish or rigmarole?

Before going with the RAE’s response, we are going to explain the two complex words that Claudio Ruiz used to pose his question. “Jerigonza” is defined as a difficult language to understand, especially for people who do not belong to a group. “Gibberish” is a term related to confusion or disorder, in this case, a language difficult to understand due to the inappropriateness of its phrases.

Regardless of whether the question carried a tone of sarcasm or not, the RAE did not miss the opportunity to put an end to a debate where they have tried to include it to change its position and allow the use of companion words. For the moment, at least with the RAE’s response, that will not happen. “What has been commonly called ‘inclusive language’ is a set of strategies that aim to avoid the generic use of the masculine gram., A mechanism firmly established in the language and that does not imply any sexist discrimination”, was the response of the RAE on Twitter.

What is inclusive language?

Inclusive language refers to any verbal or written expression that preferably uses neutral vocabulary, or makes the masculine and feminine obvious, avoiding generalizations of the masculine for situations or activities where women and men appear.