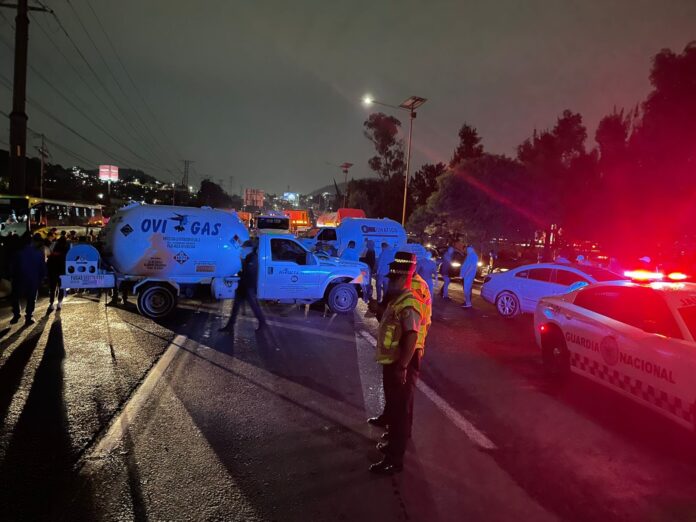 More than 30 pipes that distribute natural gas in the Toluca Valley cut off traffic on the Adolfo López Mateos highway in Zinacantepec from 2:30 in the afternoon, the protest lasted for three hours and generated significant vehicle load.

Jorge Huerta Huerta, a Unigas worker, argued in an interview that the claim to the authorities is that they have taken away their commissions.

“We have no margin to work, we have absolutely nothing (…) until a month ago they left us at 1.60 pesos, they asked us to regularize, we did it and yesterday they told us it would be 50 cents”

The worker estimated that the measure would affect more than 2,000 pipes operating in the Toluca Valley

The protesters were attended by Ramón Benítez Benítez, government coordinator in the Toluca Valley and a representative of the federal government, there they agreed to a meeting that will be held this October 12 at 11 in the morning, but the protest will be reactivated from 9 in the morning at the same point on the Adolfo López Mateos road.

Protests in CDMX and the Valley of Mexico

Simultaneously gas carriers blocked several highways and roads in the central area of ​​the country, the media reported cases in Ecatepec; on the Mexico-Tulancingo highway; on the Mexico-Pachuca Highway in Tlalnepantla and Bordo Xochiaca Avenue, among others.

It should be remembered that in August this union manifested itself, after the government of Andrés Manuel López Obrador announced the creation of Gas Bienestar, a company that will distribute this fuel at a fair price.

The federal government announced that gas was sold at high prices, especially in the CDMX, so it set a price list for these to be regulated and set the maximum prices for gas sales.

For this reason, the National Gas Association has requested the authorities to modify the pricing methodology so that they can obtain 4 pesos of profit per liter or kilo of fuel.

Due to blocking of gas carriers, people walk on the Mexico-Pachuca highway

Transport users walk from the whereabouts of Indios Verdes through the blockade of gas carriers on the Mexico-Pachuca highway.

Dozens of people have to walk along the Mexico-Pachuca highway, due to the blockade maintained by the gas carriers for more than seven hours.

People affected by the blockade of gas carriers walk among the long lines of motorists who register on the Mexico-Pachuca highway, who seek to reach their destinations.

Some people have to walk from the stop of the Indios Verdes Metro to reach their destinations in the municipalities of Ecatepec and Tlalnepantla.

Transportation systems such as Metrobús and Mexibús suspended their service in the northern zone due to this blockade of gas carriers, who have not given an hour to lift this closure that affected thousands of people in the Valley of Mexico.

At the whereabouts of Indios Verdes there are long lines of people seeking to board one of the units that cross the Mexico-Pachuca highway, however, due to the blockade of gas carriers, they have to get out of the units to walk.

Some motorists recommend using the Circuito Exterior Mexiquense as an alternative to blocking, however, other drivers have already reported that there is vehicle load.

It is unknown when the gas carriers will withdraw after they did not reach an agreement with the Ministry of Energy (Sener), which explained through a statement that the gas carriers requested that the Energy Regulatory Commission (CRE) increase one peso per kilo of LP gas to increase your net profit.

He also highlighted that the meeting was held with gas commissioners, a figure that does not exist in the regulation of the sale of LP gas.

The Sener rejected the violence and disorder that gas carriers carried out in various parts of the CDMX and announced that it will act according to the law.