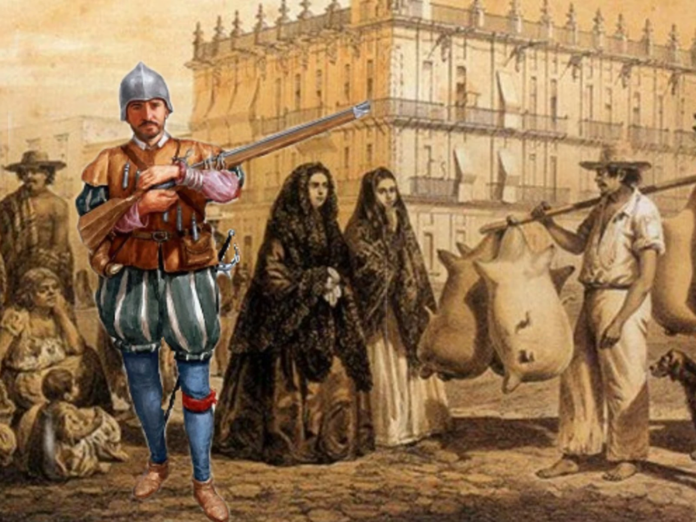 He fell asleep in the Philippines and in minutes appeared in Mexico. The incredible story of teleportation was told by Friar Gaspar de San Agustín.

On the night of October 24, 1593, Spanish soldier Gil Pérez’s eyelids began to weigh while he stood guard in the Plaza de Armas in Manila, Philippines.

The soldier allegedly attributed the exaggerated fatigue to work and the tension caused by the recent assassination of the governor of the Philippines, Gómez Pérez das Mariñas y Ribadeneira, at the hands of Chinese rowers, an assassination that led not only to him but to all the military, to be on constant alert.

In the end, the drowsiness began to overcome him, he leaned against a wall, inadvertently closed his eyes, and fell asleep. The biggest surprise of his life came when he woke up, he saw a landscape that he did not recognize, a landscape that was definitely not from the Philippines, a nation that by that time he already knew from beginning to end.

The Spanish soldier traveled from the Philippines to Mexico in seconds

Wandering disoriented through the streets, he was recognized by imperialist soldiers, who stopped him to ask who he was. He replied that Gil Pérez, a Spanish soldier on duty in Manila, Philippines. Now it was his turn to ask where he was, to which the military would have answered that in Mexico.

It was impossible for him to be in Mexico, Gil told the guards, because before closing his eyes he was in the Philippines, that is, 14,211 kilometers away. Pérez told the guards that even the day before the governor of Manila had been assassinated by Chinese pirates.

What he was narrating was implausible, since it took at least two months for a ship to arrive from the Philippines to the Mexican coast, and a little longer for the crew of a boat to reach the capital of Mexico.

Nobody believed the teleportation story of soldier Gil Pérez

Because of his strange history, the soldiers took him prisoner, he was taken to the authorities, Gil repeated ad nauseam to the members of the Holy Inquisition the same story: that he was a Spanish soldier, that one day before waking up in New Spain (CDMX) was on duty in Manila, that the governor of the Philippines had been killed by Chinese rowers, that he fell asleep and that he woke up here.

But none of this was validated by the authorities who ended up locking him up accused of being a deserter from the Spanish militia or perhaps even a servant of the devil.

In his confinement of more than 60 days, Gil told his misfortune to guards, prisoners and officials, who did not believe what he was saying, it seemed that his destiny was drawn: to spend the rest of his life in prison, but people he began to know his history and to become famous.

After this time, a ship from Manila arrived on Mexican shores, which brought the news that Chinese pirates had assassinated the governor of the Philippines Gómez Pérez das Mariñas, such news had left the Mexican authorities frozen, not only because of the fact that It was an assassination, but because it squared with what Gil Pérez had said more than two months ago.

In the same boat from Manila, there was also a Spanish soldier, who immediately recognized Gil Pérez as one of his companions. Faced with the evidence, the authorities had no choice but to release the prisoner, who would have decided to return to the Philippines.

It was Fray Gaspar de San Agustín, who would have written about the teleportation of soldier Gil Pérez based on interviews with people who knew the story, in order to integrate the book Temporal and spiritual conquest of the Philipine Islands, published in 1698.

“It is worth pondering that the same day that the tragedy (of death) of Gomez Pérez happened, it was known in Mexico through the art of Satan, who, using some women inclined to such agility, transplanted a Soldier to the Plaza de México that he was doing post one night in a sentry box on the wall of Manila and the Soldier was executed so without feeling it that in the morning they found him walking with his weapons in the Plaza de México, asking the name of how many were passing. But the Holy Office of the Inquisition of that City sent him to these Islands, where many knew him, who assured me of the certainty of this event “, narrates in his book Fray Gaspar de San Agustín.

Gil Pérez’s teleportation story has its detractors, however, we cannot ignore those data that do fit in the sequence of events, so this narrative serves as a pretext to explore more about the common past of the Philippines and Mexico.