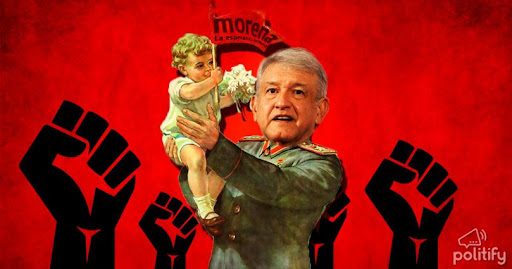 For the president, scientists are like high-risk drug traffickers who must be imprisoned in maximum security prisons, while the narco hitmen continue to be free and cause terror in every state of the country.

The controversial decision made by the President of the Republic, Andrés Manuel López Obrador, on seeking arrest warrants against 31 scientists and researchers from the National Council of Science and Technology ( CONACyT ) has caused an international stir.

The media and specialists have issued their opinion and were alarmed by this persecution against the community. One of the newspapers that added to the criticism was the Wall Street Journal (WSJ), which published a harsh questioning against AMLO.

This article, written by David Luhnow, editor for Latin America, mentions that the national president made these accusations of organized crime and money laundering due to an eternal dispute he has against Mexican intellectuals.

He recalled that the legal support sought again this week is old and little supported, since the authorities have twice rejected his requests, but, apparently, he is not going to surrender, since he filed a new complaint to obtain the arrests for the alleged use approximately $ 12 million illegal.

The 31 investigators are being charged with serious crimes that are equivalent to at least 80 years in prison (Photo: Special)

Despite the accusations directly from the National Palace, the members of the scientific advisory committee said they did nothing wrong and that the spending had been audited and approved, however, it was not enough for López Obrador, who sought to send them to jail as if they were dangerous drug traffickers.

“The government seeks to hold scientists, which include astrophysicists and microbiologists, in a maximum-security prison where some of the most notorious drug traffickers in the country are housed, including Joaquín ‘El Chapo’ Guzmán. If found guilty, some of the academics would face more than 80 years in jail, ”it reads.

Through the count made by the US media, he pointed out that CONACyT had carried out its tasks without problems since its creation in 2002, but that good relationship with the government was broken in 2018 when AMLO came to power.

From that moment, he faced a reluctant president who always sought to generate a lawsuit with the designated director, biologist María Elena Álvarez-Buylla. Mainly he questioned whether its public financing “should be apolitical or be carried out with the political and social sphere.”

For Ana Laura Magaloni, a law professor at the CIDE University of Mexico interviewed for this article, the accusations are so irrational that “they scare everyone in Mexico, because they could imprison anyone.”

While José Franco, chief researcher at the Institute of Astronomy of UNAM, said that the annual expenditure of CONACyT was audited and approved every year, even under the current government.

“I have always been in favor of transparency and accountability (…) The committee’s financial reports are public and available on its website. However, the Conacyt has chosen to file unfounded criminal charges , which says a lot about its intention, “he explained.

One of the aspects that most caught the attention of the US environment was the precariousness of the National Council, which ” has very limited scholarships ” for young people to study abroad, because for the current government it is better to stay in the country. country and make articles written in Spanish or indigenous languages ​​instead of English.

Some legal experts said that the current administration appeared to be using the legal system to go after its political enemies.

Whatever happens in the end, AMLO will be harshly criticized for this persecution (Photo: Cuartoscuro)

This fierce fight against science has wiped the war against drug trafficking off the map, a problem that increasingly afflicts society, as a confrontation, a massacre or some crime related to this crime is recorded daily.

However, the objective changed and now investigators are more wanted than hitmen, although they are comparable in the crimes they commit, which are considered serious and without the option of bail.

Several were the figures that opposed AMLO. Such were the cases of Enrique Graue, rector of the UNAM, who described the charges as absurd. For her part, the head of government of Mexico City, Claudia Sheinbaum Pardo, faithful to the president, described them as excessive. Finally, Morena’s coordinator in the Senate, Ricardo Monreal, expressed “my total solidarity with the scientific community.”

For the WSJ, the actions taken by López Obrador against the scientific community have no reason to be, although the president remarks that the members had too much influence over previous governments to obtain money used in luxuries and trips abroad.

“It was a kind of blackmail and they had to be given these funds (…) And when that disappeared, that extravagance, those luxuries, that waste, they complained that we are not investing in science, that we do not care about technological innovation”, were the president’s sayings, which will continue to be criticized no matter what happens at the end of the road.