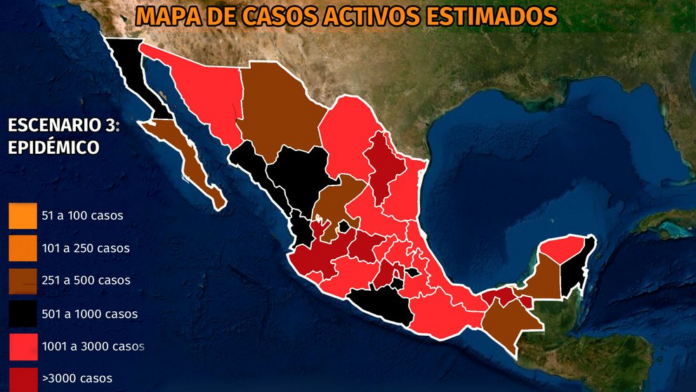 There are currently 68,502 active cases, that is, people who have presented signs and symptoms of COVID-19 in the last 14 days

According to the daily technical report, epidemiological week 36 closed with a 20% decrease in the number of estimated COVID-19 cases compared to the previous week.

There are currently 68,502 active cases, that is, people who have presented signs and symptoms of COVID-19 in the last 14 days and that represent 1.8% of the total; It is worth mentioning that if all sanitary measures are not maintained, they could potentially contribute to the transmission of the virus.

In this sense, the entities with the highest number of active cases per 100,000 inhabitants are Tabasco, Colima, Mexico City, Yucatán, and Querétaro. Meanwhile, Chiapas, Chihuahua, Guerrero, Veracruz and Sinaloa have the lowest rates.

Also, to date, 10,548,157 people have been notified to the National Epidemiological Surveillance System. Of the total of the applied detection tests, 6,406,149 have given a negative result. In addition, the number of positives could increase in the next few hours due to the estimated existence of 512,196 total suspected cases.

On the other hand, there are already 2,978,300 patients who have recovered and received medical discharge after having had any symptoms related to the disease.

Regarding hospital saturation, the average occupancy of general beds is 36%, that is, one point lower than that reported the previous day. Only Puebla and Michoacán reported more than half of their occupation. Between 30% and 49% 22 states were located, while eight more did not exceed the first third of their occupied beds.

On the other hand, in beds equipped with ventilation support, that is, for the care of intensive therapy patients, their percentage was confirmed at the national level at 30%. Morelos is the only state with more than half of its beds occupied. Fifteen states reported the use of their places between 30% and 49%. Meanwhile, 16 entities in the country are below 30%.

Until next October 3, in color ” red ” (maximum risk of contagion) there will be no status. On the contrary, in the color “ green ” (low risk) there will be four states, two more than a couple of weeks ago: Baja California Sur, Sinaloa and both Chihuahua and Chiapas remain; the latter has not changed all of 2021.

While in ” orange ” (high risk) there will be four: Tamaulipas, Tabasco, Colima and Morelos.

This September 24, 612,781 vaccines were applied to reach 98,895,325 doses supplied since December 24, as part of the National Vaccination Strategy against COVID-19, with which 71% of the population over 18 years old has at least one dose .