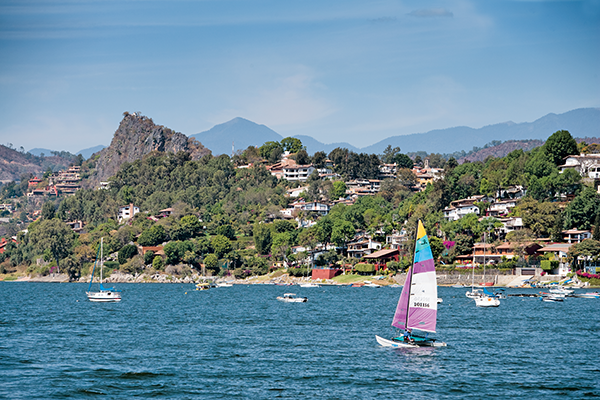 Delegates from the towns of Valle de Bravo and Conanp denounced logging activities, removal of soil with heavy machinery and the construction of a cabin within a Protected Natural Area whose tourist dam has not recovered from the drought before Profepa.

Valle de Bravo, a Protected Natural Area of ​​the State of Mexico with forest, dam, waterfalls, rivers, and springs, has been the target of real estate speculation —that is, the rent and purchase of millionaire land – and signs of a change in land use from forest to residential, situations that have been exacerbated in the last year as a refuge from the pandemic by people with resources. All this has worried the residents due to the impact it has on the water supply.

On the road to Los Álamos, near the El Crustel spring, tenants detected the felling of trees, the removal of soil with heavy machinery, the construction of a two-level hut and drainage pipes to the Chiquito river, which flows into the tourist dam ” Miguel Alemán ”.

The storage of this body of water, which supplies Mexico City through the Cutzamala System, has been at less than half its capacity since May after the prolonged drought recorded in more than 80 percent of the country. During the start of this cyclone and rainy season, its volume is still 43 percent, according to figures from the National Water Commission (Conagua).

Since April 2017, the Mexican delegation of the Ministry of the Environment (Semarnat) issued an environmental authorization (DFMARANT / 2013/2017) to the Club Residencial Los Álamos project in the municipality of Valle de Bravo.

The plan is to build nine houses and a riding club with stables and a guardhouse for wealthy people who have historically taken refuge in this town, a situation that has increased during the pandemic.

However, the conditional permit does not authorize the removal of tree vegetation, the opening of roads, or the abandonment of construction material. As it is the only permit registered in the area, where the works have been observed since June, the residents suspect illegality.

Given this, the delegates of the towns of Loma de Chihuahua, Loma de Rodríguez, Los Álamos, and San Mateo Acatitlán, of the Valle de Bravo municipality, filed a complaint on June 28 with the Federal Attorney for Environmental Protection (Profepa) referring to this project. , since the works detected damage the mesophilic mountain forest that stands out for its high biodiversity and trees up to 30 meters high. In it live species in some risk category such as snakes and the cinnamon-breasted hawk.

“We proceed to file a popular complaint against who or those who are responsible for the activities of clearing, opening of gaps, removal and accumulation of soil with heavy machinery that are being carried out on properties located next to the road ‘El Castellano’ and ‘la Gran Stupa ‘in the town of San Mateo Acatitlán, which are located within the polygon of the Natural Resources Protection Area Cuenca de los Ríos Valle de Bravo, Malacatepec, Tilostoc and Temascaltepec ”, states the complaint.

This Protected Natural Area of ​​more than 140 thousand hectares was decreed on November 15, 1941, and recategorized in 2005 to protect the forest area that collects water in the basins that supply the inhabitants and crops of Valle de Bravo, and part of the City from Mexico.

Half a month after the complaint was filed with Profepa, no inspectors have come to the area. They have only gone by the Forest Protector of the State of Mexico (Probosque), said in an interview one of the complainants, the Delegate of San Mateo Acatitlán, Teófilo Garduño Vargas.

“What most worries the people is not so much the constructions, but that –now that the ‘Miguel Alemán’ dam has decreased a lot – with all the removal of earth, the opening of ditches and the felling of the trees, the springs are no longer they are going to keep the same and they are the ones that keep us all in Acatitlán and a large part of Valle de Bravo ”, he stated.

In addition to Profepa, the residents also alerted the forest rangers of the National Commission of Protected Natural Areas (Conanp) about the works, due to signs of a change in land use from forest to residential.

“The spring known locally as El Crustel, used for the water supply of Acatitlán and the municipal seat of Valle de Bravo, is located on the other side of the road affected by the removal of soil and its direct recharge zone includes the affected property, so any change in land use that affects the water table is alarming, “says the complaint to Profepa.

The works are within the Environmental Management Unit of the Regional Ecological Ordinance Program of the Valle de Bravo-Amanalco Sub-basin. Being conservation, the change of use of forest land and the removal of vegetation for non-forest activities is prohibited. It also prohibits the use of heavy machinery and dismantling.

At the end of June, after an inspection in the area, Rafael García Soriano from the direction of the Protected Natural Area of ​​the Valle de Bravo, Malacatepec, Tilostoc, and Temascaltepec basins of Conanp filed another complaint with the Profepa delegation in the State of Mexico due to the possible change in land use on the property next to the “el Castellano” road in Acatitlán.

“A property was registered with a board with at least 2,300 cubic meters of earth removed with machinery on the side of the road to ‘El Castellano’; thus a two-story building was also located under construction and the clearing and excavation in a forest space “, exposes the complaint against Nizo” N “, alleged owner of the property.

Conanp raises in the complaint, violates what is allowed in the sub-zone of Sustainable Use of the Valle de Bravo resources where the works are located.

In addition to both popular complaints, the residents launched a petition on Change.org to demand a response from Profepa.

Sale of land in Mexico grows to triple digits; which states stand out

THE SOPHISTICATED BEAUTY OF ART DECO AND ART NOUVEAU IN CDMX