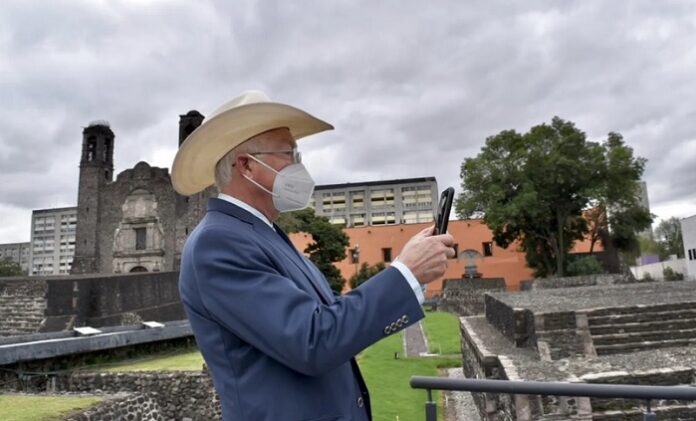 The United States Ambassador to Mexico, Ken Salazar, began his new position with a tour of Mexico City. On Sunday, September 12th, the ambassador and his wife made a visit to the Basilica of Guadalupe in Mexico City where he attended mass and prayed for both countries.

The ambassador placed a wreath at the grave of former president Benito Juárez García in the San Fernando pantheon. He later visited the Plaza de las Tres Culturas de Tlatelolco where he said he was “impressed” by the archaeological site and the plaza, where he acknowledged “the great history and heritage of Mexico.”

“I was excited to learn more about the history of Mexico,” he wrote on social media.

Before the day was done, Salazar visited the Monument to the Revolution, which he described as “one of the most emblematic places in Mexico City.”

Salazar, who was sworn in on September 2 in front of Vice President Kamala Harris, arrived in Mexico on Saturday, September 11th. Upon arriving at the capital airport, he gave a press conference in which he said that migration, the pandemic, security, and climate change will be his priorities.

The Democratic politician takes over the embassy replacing Christopher Landau, who was appointed by Donald Trump in 2019 and left office on January 2021, when Joe Biden assumed the presidency.

Mr. Salazar is an experienced official who has held the positions of Colorado attorney general, senator, and secretary of the interior in the presidency of Barack Obama between 2009 and 2013 when he prioritized the energy transition.