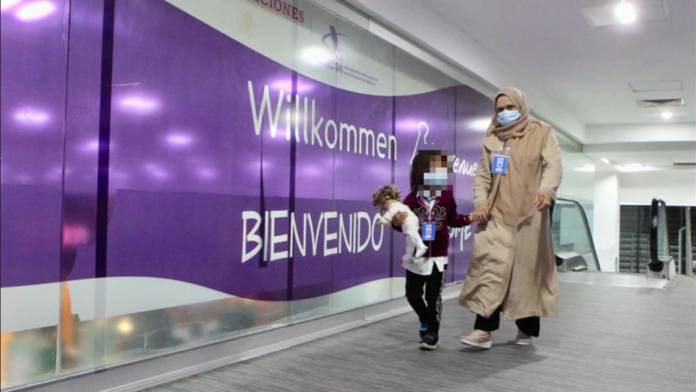 Among journalists and families of young talents

On this occasion 93 Afghan citizens enter the country, 45 women and 48 men, they were granted a humanitarian visa valid for 185 days

On Friday night the fifth group of Afghan nationals arrived in Mexico City. On this occasion, 93 Afghan citizens, 45 women and 48 men will enter the country, made up of media workers and activists; as well as their families. 51 of them are minors.

“On behalf of Foreign Minister Marcelo Ebrard we are receiving a new group of people in a situation of humanitarian reception to our country, they come from a flight from Qatar, London, they arrive today in Mexico and they come from various press groups, the media and some of them are family members of one of the girls from the Afghanistan robotics team that we received a couple of weeks ago here in the country, “said Martha Delgado, Undersecretary for Multilateral Affairs and Human Rights.https://8768b42683cb875ba183c6f601d86983.safeframe.googlesyndication.com/safeframe/1-0-38/html/container.html

The Mexican Embassies in Iran, Qatar and the United Kingdom worked simultaneously for the conformation and arrival of this flight. Similarly, close communication between the Ministry of Foreign Affairs, the Ministry of the Interior and other entities of the Federal Government, as well as with the Embassy of the United Kingdom in Mexico were crucial for the success of this operation.

“ Refugees or asylum seekers require assistance in many ways, their condition of forced displacement places them in a situation of vulnerability and discrimination. Supporting them involves everything from legislative actions to accompanying public policies, which is why they were given a humanitarian visa valid for 185 days to reside in Mexico, ”Delgado explained.

“The leadership of President Andrés Manuel López Obrador and Secretary Marcelo Ebrard Casaubon, as well as the coordinated work of the Federal Public Administration units have been key for the Mexican State to continue providing protection and assistance for humanitarian reasons to Afghan nationals who they face serious threats to their safety and personal integrity. Mexico, true to its tradition of refuge and asylum will continue to evaluate all possibilities to continue supporting this cause, “the Foreign Ministry said in the statement.

They also explained that the Mexican Government, through the SRE, has remained vigilant over the political, economic and social situation in Afghanistan, with special emphasis on the protection and promotion of human rights; taking into account the international commitments regarding asylum and refuge.

It was on August 31 that the fourth group of  175 Afghan refugees arrived at Terminal 1 of the Mexico City International Airport ( AICM ), made up of social media workers, activists and independent journalists, accompanied by their families,  including 75 boys and girls.

In a statement, he reported that to achieve the arrival of this flight, the first of  Egypt Air to Mexico in all history, the Mexican Embassies in Iran, the United Arab Emirates and Egypt had to intervene. Similarly, the Egyptian government collaborated.

For immigration procedures, the SRE maintained close communication between the Ministry of the Interior and other entities of the Federal Government.

“As in previous cases, coordination was essential for the arrival of these people and protecting their integrity. Travel and living costs during their stay in our country will be covered by private sponsors and civil society organizations, ”he explained in a statement.

On Sunday, August 29, Mexico received the third group of Afghans, which was made up of 86 people from Qatar and the United Kingdom. Similar to today, among the members were media workers and their families. Some people worked as collaborators of the newspaper  The Wall Street Journal in Afghan territory.

Last Tuesday, August 24,  Foreign Minister Marcelo Ebrard also welcomed a group of Afghan women belonging to the AfghanDreamersTeam or The Afghan Dreamers team, known internationally for the creation of fans – from used car parts – to caring for patients with COVID-19.

“We are happy that now we are safe,” Saghar said in an interview with  The Associated Press and indicated that they left with the hope of helping from abroad, through a foundation, their compatriots who remained in Afghanistan. “We went out with the hope that we could save them too,” the young women said at the joint conference with the chancellor.

Talking about the difficult hours that passed after the Taliban took control of the Asian country, a young woman related, in fluent English, that  “we were so stressed that we could not eat or sleep well for many days . we sat together and wept thinking about what solution we could have ”. Despite adversity “we decided to choose to fight”  and they sought to leave before the Taliban acted against them.

Saghar, 17, said Mexico’s decision to host them was a great joy for the group, but admitted that they are still very worried about the relatives left in Afghanistan, who hope they can also leave the country.

The group of  “Afghan dreamers” was created four years ago by entrepreneur and technology entrepreneur Roya Mahboob who runs the “Digital Citizen Fund” that teaches classes for girls in science, technology, engineering, mathematics and robotics.

Hours later, at dawn on August 25, a group of more than a hundred people, including workers from  The New York Times newspaper, landed in Mexico City, on a flight from Qatar.