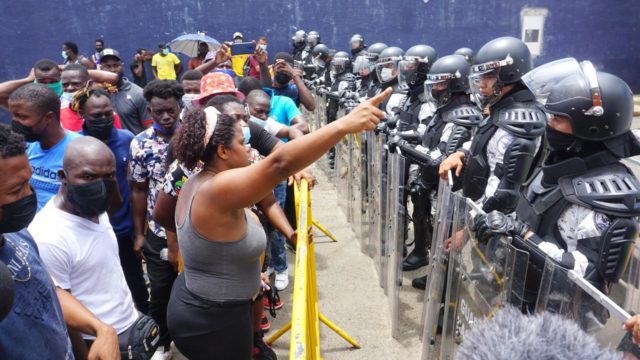 Hundreds of migrants and asylum seekers, mostly from Central American and Caribbean countries, left Tapachula, Chiapas, in a caravan, for Mexico City to demand that their asylum applications be expedited.

The group of about 500 people included families with young children from Haiti, Cuba, Central American countries and Colombia, according to a Reuters witness.

The caravan occurs after several days of protests by migrants in the city of Tapachula, who demand that their cases be accelerated so that they can leave the state of Chiapas, and relocate to other parts of Mexico or go to the United States border without risk of deportation, according to local media.

Under Mexican law, migrants must remain in the state where they applied for asylum until their cases are resolved, a process that can take months or years.

On Saturday morning, dozens of migrants gathered around a banner that read “Tapachula Immigration Prison” before beginning to march through the streets, waving flags and shouting “Yes, we can,” according to a video posted on social media.

Both Mexico and the United States have witnessed high levels of migration this year, particularly from Central America, where violence, poverty, and a hunger crisis have forced hundreds of thousands to flee.

US Customs and Border Protection agents have made more than 1.2 million arrests or expulsions of migrants crossing the US border since October.

Mexico faces mounting pressure from Washington to take action to reduce immigration to the United States. In recent weeks, the Mexican government has sent thousands of migrants to southern Mexico by plane, where they are transported by buses to the border with Guatemala.

The United States has also urged Mexico to clear camps hosting thousands of migrants in border cities due to concerns that they pose a security risk and attract criminal gangs.