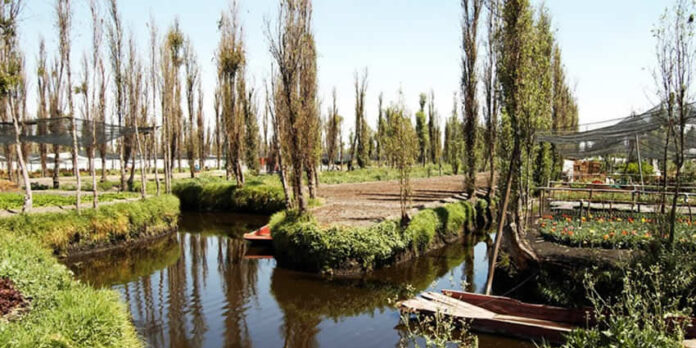 Chinampas, also called floating gardens, are small, stationary, artificial islands built on a freshwater lake for agricultural purposes. Chinampan was the ancient name for the southwestern region of the Valley of Mexico, the region of Xochimilco, and it was there that the technique was—and is still—most widely used.

Chinampa (Nahuatl languages: chināmitl [tʃiˈnaːmitɬ]) is a technique used in Mesoamerican agriculture which relied on small, rectangular areas of fertile arable land to grow crops on the shallow lake beds in the Valley of Mexico. Chinampas were invented by the Aztec civilization.

The Aztecs used these stunning floating gardens — otherwise known as chinampas — to grow their crops without harming the environment.

The resulting system of canals and gardens created a habitat for fish and birds, which helped maintain the health of the ecosystem and also provided additional sources of food.

At the height of the Aztec Empire, thousands of these fertile and productive chinampas surrounded Tenochtitlan and other Aztec cities. Terraced, irrigated fields added another layer of farmland for the hungry Aztecs. To bring water to these fields, Aztecs farmers dug irrigation canals in the soil.

The modern-day Chinampas can be used on top of lakes, ponds, or any other fresh body of water. One application of this garden will be cattle ponds, the ponds that cattle ranchers use to provide drinking water for their cattle.

In order to safeguard this ancient agricultural system, Refugio Rodríguez Vázquez, a researcher at the Department of Biotechnology and Bioengineering of the Center for Research and Advanced Studies (Cinvestav) of the National Polytechnic Institute, promotes the application of several technological developments for the treatment of soil and water, among which the oxygenation of the channels by means of a method of generation of micro-nano bubbles stands out, which is adapted to trajineras.

This ecological zone is at risk due to the contamination of its waters, she recalled.

The novel nanobubble system manages to reduce pollutants in the water in the canals, as well as greenhouse gas emissions.

Rodríguez Vázquez explained to Xinhua that the work is focused on oxygenating the water in the canals in the chinampa area.

“The system consists of placing solar panels that convert the energy into photovoltaic, which activates a pump that generates, through a tube, the bubbles, which remain in the water and oxygenate it, thereby improving its quality, benefiting to flora and fauna, reduced due to pollutants”.

She explained that the nanobubble system helps to take care of the health of the population and contributes to improving the quality of life of farmers in that rural area.

“It is an economical method and has easy-to-use equipment, in addition to the fact that the solar panels allow a sustainable and independent operation,” she reiterated.

Another benefit is that the system can be installed by farmers in the region, and its maintenance is easy and cheap.

One of the farmers who has benefited from nanotechnology is Miguel Poblano Lugo, who pointed out that he feels very satisfied that this instrument is being used to safeguard the canals.

“I thought it was fabulous that someone from outside came to try to rescue Xochimilco,” the rower also told Xinhua. He added that oxygenating the water and making it pure seemed “excellent” to him, hence his support.

Poblano Lugo said that he learned how to install the machine, so he will make sure that more farmers know about the system and can benefit from it.

“I’m glad to see that this does work,” mentioned the farmer, to add that if they support them, “we are going to have this working every day until the little machine says I won’t give any more.

“The fact that we rescue Xochimilco with this new technology is much better and more practical,” he concluded.