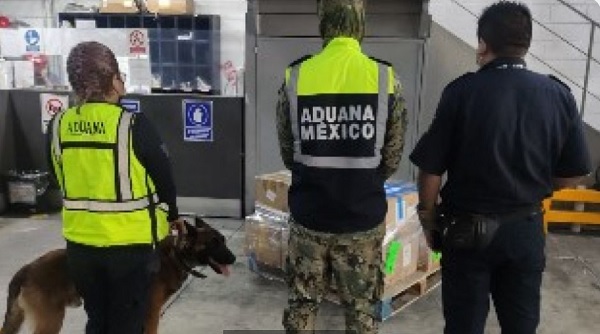 The seizure was achieved with the support of the “Zeus” K-9 Unit, trained in the detection of narcotics, which made a positive mark on 8 cardboard boxes on Saturday, August 7th in the cargo area of the Mexico City Airport.

Mexico City.- Agents of the Secretariat of the Navy (Semar) and the National Guard seized 204 kilograms of fentanyl at Customs at the Mexico City International Airport (AICM), coming from Hong Kong.

The detection was carried out by the canine binomial “Zeus”, trained in the detection of narcotics, who made a positive mark where the illicit merchandise was found.

Customs personnel located the merchandise in eight cardboard boxes that contained plastic bags with beige powder. After doing the corresponding tests in the laboratory, it resulted in a fentanyl precursor.

The Mexican Navy reported that the merchandise was in the hands of the National Guard, in the General Anti-Drug Directorate, the institution that made the corresponding provision.