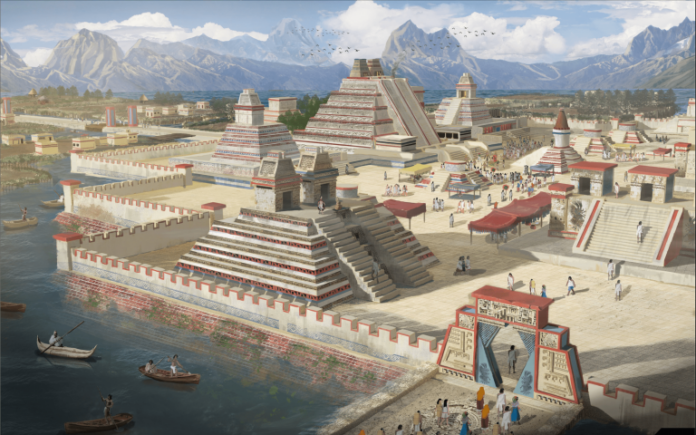 The great feat of ancient engineering in Tenochtitlán came to house more than 200,000 people on waters and swamps.

Tenochtitlán was a culture that made great architectural pieces with fascinating designs.

In the center of the Valley of Mexico, at more or less 2,200 meters of altitude, was located the place that would serve as the ideal territory to build the capital in 1325. This valley stood out, as is well known,  for the lake system that surrounded it. . The five lakes of Xochimilco, Chalco, Texcoco, Zumpango and Xaltocan constituted 2000 square kilometers.

One of the great feats of the Mexica, the people that raised the first stones to build the CDMX was precisely to achieve magnanimous buildings on water and mud, but how did they do it?

In addition to the engineering feat, the urban layout that impressed the Spanish with its beauty and development made the great Tenochtitlán one of the largest and most powerful cities of antiquity, an excellent example of architecture with many lessons, here the three main ones.

The legend by which the Mexica decided to settle in the basin of Mexico is known, that sign of Huitzilopochtli that today wears our national flag, which is believed or not, definitely indicates the always important cosmological consideration in the life of the Mexica, until in its urban layout.

The Huitzilopochtli temple was the center of its city, the point from which everything would be built, which is why the land was divided from there into 4 sections separated by roads oriented towards the 4 directions of the universe.

The four sections were called Moyotlan, Teopan, Atzacoalco and Cuepopan; the roads still exist, but we know them as great axes, to the west, San Cosme; to the north, Calzada de Guadalupe and to the south, San Antonio Abad.

The urban layout in those days was not only made to meet the needs of an urban settlement, but Tenochtitlan was also drawn with a deep cosmological sense that gave consistency to its entire design, and that is the great lesson: a city as a whole, an organism I live connected to the universe.

Naturally, as the years passed the city grew so the Mexica had to face the foundations outside the main islet, a marshy area that separated them from the mainland and that filled with water in the rainy season.

They solved it with a system of huge stakes that they buried in the ground surrounded by a layer of tezontle, that wonderful porous and light stone, which served as cement. The stakes were used to anchor the buildings and build flyovers up to 14 meters above the water. The lesson? That in architecture and engineering there are not impossible.

In Tenochtitlán there was never a lack of water, there was plenty of it, so they had to use all their ingenuity to live with it and efficiently transport drinking. Irrigation canals, aqueducts, and a dam were built over the years according to the needs of the growing city.

The aqueducts carried the water from the springs to public fountains and reservoirs, points where the population could drink water with the help of clay jugs. The irrigation canals reached the fields and the chinampas, another marvel of Mexica construction.

The chinampas were small artificial islands that were created by weaving sticks on which reeds and herbs were piled up that supported the mud on which they could be sown. Thanks to the chinampas, the Mexica were able to cultivate at greater speed and quantity, making Tenochtitlán a self-sustaining city.

Today this is the most important lesson that ancient Tenochtitlán leaves us, the care of water. All the power of an empire or a great city can be compromised if water, contrary to what happened in those days, today we must take care of the opposite, its scarcity.