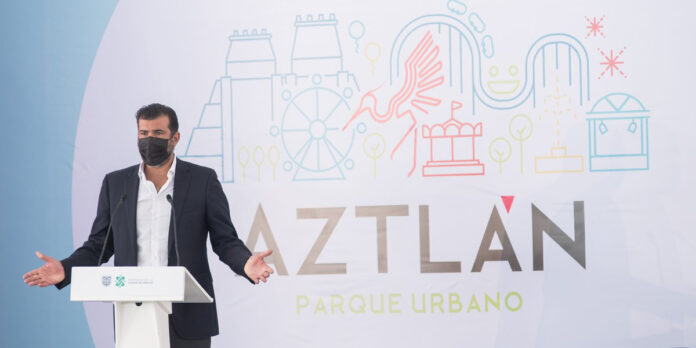 Thor Urbana, a real estate developer in partnership with Mota Engil México, a company in the construction sector, started the works of the Parque Urbano Aztlán amusement center, which will be the complex that will replace the Feria de Chapultepec, which was closed after an accident in the which two people died, while two others were injured in 2019.

With this project, more than 6,000 direct jobs will be created and it will comprise a space of 6 hectares, previously occupied by what used to be La Feria de Chapultepec.

“The Chapultepec Fair is transformed into the Aztlán Urban Park. Unlike the previous one, you can enter for free to enjoy different activities and green areas are being recovered. It will be one of the best urban parks in Latin America, ”said the head of the government of Mexico City, Claudia Sheinbaum, on her Twitter account.

Sheinbaum also pointed out that some of the rides will have a cost.

“The private sector has the opportunity to claim its social commitment. The responsibility and obligation of our sector are to take advantage of the opportunities that are presented to us, let’s work and make things happen, that will be the legacy of the city’s businessmen “, José Miguel Bejos, president of Mota Engil México, explained through a statement.

The Aztlán Urban Park will have a historical theme with the most representative historic moments of the nation’s capital, in addition to sustainability elements, such as the use of solar panels, reuse of construction materials, conservation of green areas, reuse of treated water, among others.

The opening of the amusement complex is planned in its entirety for the year 2023, although activities will begin this year, with the installation of a monumental offering on the occasion of the Day of the Dead, in coordination with the Dolores Olmedo Museum.

Additionally, it will house a three-level enclosure where the Monumental Offering of the Dead is planned for next November.

By 2022, the Mexican Museum of Immersion will be put into operation; at the end of that year, the first rides will be opened, and by the beginning of 2023 the park will be permanently open.

Chapultepec will have a wheel as tall as Chicago’s.

Mota Engil and Thor Urbana were selected, in December 2020, by the Government of Mexico City to develop the project that will replace the Chapultepec Fair.

Without Roller Coaster, in its place, a viewpoint will be installed from where you can see the whole Chapultepec Park, and Paseo de la Reforma, we’re talking about a 100 meter high Ferris wheel.

Other attractions will be the cable car called Paseo Colibrí and an area for concerts. The investment will be for 3.6 billion pesos.