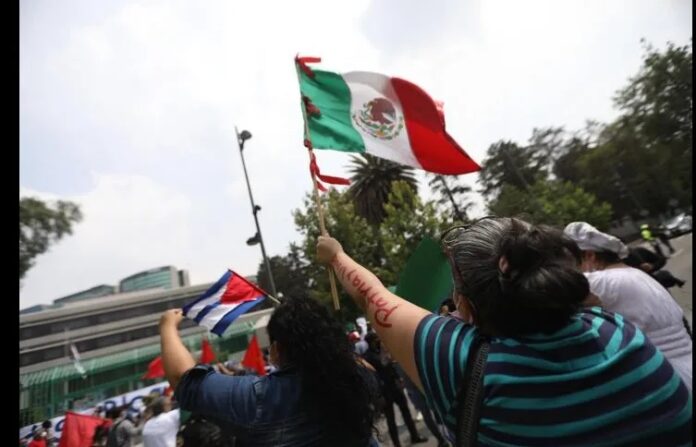 Supporters and opponents of the Cuban government protest in Mexico City.

Supporters and opponents of the Cuban government clashed on Monday in protests at the Cuban Embassy in Mexico, where the position of the Mexican President Andrés Manuel López Obrador (AMLO) also caused division.

Dozens of protesters in Mexico City called for the end of the United States embargo and supported Cuban President Miguel Díaz-Canel in a demonstration called by the Mexican Movement of Solidarity with Cuba and the José Martí Association of Cuban Residents in Mexico.

Supporters of the Cuban president replicated his rhetoric of “war”, “interference” and “media manipulation” during the demonstration at the Cuban Embassy in Mexico City, located in the Polanco neighborhood.

But opponents of the Díaz-Canel and Castro governments also arrived at the site, recalling that these are the strongest protests on the island since the so-called “Maleconazo” of 1994.

At the protest, the Cuban ambassador to Mexico, Pedro Núñez, said he was “very grateful” to the Mexican president, something on which his supporters agreed.

Andrés Manuel López Obrador says that the blockade ends. Andrés Manuel put his position very well in the morning with all the support of the Mexicans, “said the Mexican Patricia Cortés, who came to support the” revolutionary people of Cuba.