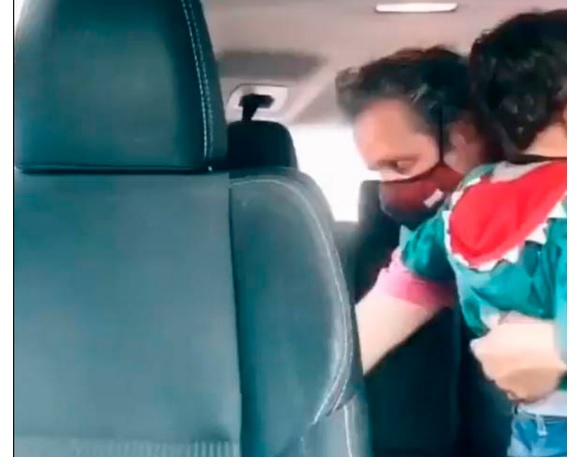 The level of insecurity that exists in Mexico City is getting worse by the minute, every day we hear stories of robberies, homicides, and other crimes that are more and more frequent. However, in recent days a man was able to record a robbery and broadcast it live on TikTok. This video has gone viral on the internet.

In the footage, it can be seen how a subject wearing a motorcycle helmet, together with his accomplice, steals a car from a man who was traveling with his son and his dog in the backseat. The event took place while the man was doing a ‘live video’ on his TikTok account.

The event took place on Thursday, July 8th, on Avenida Toluca, in the Álvaro Obregón district of Mexico City. Enrique, the man who was traveling with his son and his dog, went to this place to deliver a shipment of face masks valued at 20 thousand pesos. Products he began selling during the pandemic after several economic setbacks.

While Enrique waited for Julio, the man who was going to buy the masks and who is one of his acquaintances for years, he began to film a ‘live video’ through TikTok, a platform in which he has a considerable number of followers and where he was interacting with other friends at that moment.

Enrique got off his car, walked to the trunk where he took out the face masks, and he was still on his cell phone broadcasting ‘live’ on TikTok while some of his followers were watching.

So far everything seemed normal until Enrique opened the trunk, and a guy wearing a motorcycle helmet came out of nowhere and pointed a 45 caliber pistol at his stomach.

“OK cabrón, I want the car keys and your cell phone, hurry up or I kill you,” said the criminal.

Enrique remained calm at all times and told the assailant that he would give him the car keys, but that he was going to get his son and his dog out of the vehicle first.

“He told me: ‘the child stays and so does the dog.’ I turned around and said, ‘That’s not going to happen pendejo.’ Enrique said.

Without thinking, Enrique turned his back on him, opened the back door of the vehicle, and got his son and his pet out.

“He could have shot me, but when you’re child is in danger, you don’t give a damn about your own life. I opened the door of my car, which can be seen on the video, grabbed my baby and my dog, while he continued to point the gun at me,” Enrique said.

At that moment, the accomplice appears on the TikTok video, gets behind the wheel of the vehicle, and they both flee the scene – one aboard Enrique’s car, and the other on a motorcycle – and they do so without realizing that they are being seen by thousands of people who are closely following Enrique’s TikTok “live broadcast.”

“The guy on the motorcycle headed north on Periférico, and at that moment I see my car making a U-turn and coming towards me at high speed as if he wanted to run me over,” said Enrique, who immediately asked for help from a police car that was nearby.

Although the police officers told him that they were going to find his truck with all his valuables, and even asked him not to file the corresponding complaint under the argument that it “would affect them”, Enrique went home and after contacting his insurance company, he went straight to the delegation.

“At the delegation, I was told that I would have to wait 25 hours to be attended because it takes 45 minutes per person and there were 25 people in line,” Enrique explained. So he went home, took an old cell phone that he had, and remembered the TikTok live broadcast, which he downloaded to viralize it on social networks hoping that the identity of the criminals can be known.

Enrique uploaded the video to the internet and spoke with his lawyer, who is also a close friend, and he asked him to file the corresponding complaint. For that reason, Enrique went to the CDMX Attorney General’s Office in the company of his legal defenders, where he unwittingly verified how difficult it is to access justice in Mexico if you don’t have “contacts”.

“They treated me very well there. In the delegation, they did not treat me badly, but it was a classic bureaucratic service of ‘sign your name up on the list and we will be with you in 25 hours,” said Enrique.

The man has already received support from the capital authorities, although he criticizes the work of the police, which is supposed to be monitoring various points of the CDMX. “What strikes me as “weird” is the fact that in the video the two thieves can be seen talking on the phone, and the one who is driving my car tells the other that the patrol car is in front of him,” Enrique said.

“How is it possible that the police officers do not find it strange that a guy with a motorcycle helmet on is driving a car right in front of them? Is it normal to drive a car with a helmet on? For me, that is a sign of suspicion that the police can collude with these criminals,” said Enrique, who hopes that the thief will be caught thanks to the fact that the video uploaded on TikTok went viral, and thousands can see his face, which may help to find his whereabouts.