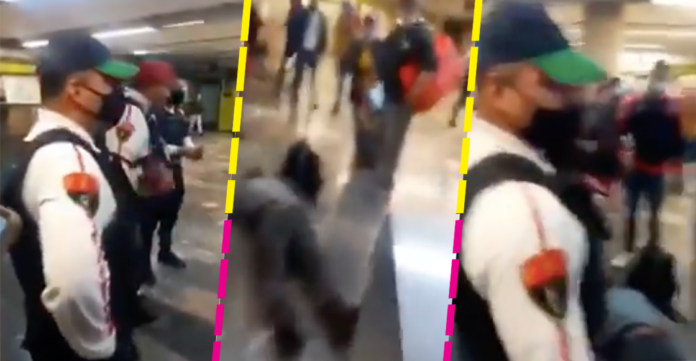 Metro trips have been quite salty and in recent weeks, between closures, delays, floods, and accidents, the experience of the CDMX orange limousine is not exactly the most pleasant. Now, a new controversy arose from a man who, apparently, wanted to enter without a mask.

Social networks accuse a policeman from the Indios Verdes station that he centered him and left him lying on the turnstiles.

Although we do not doubt that more than one savored the idea of ​​blowing someone without a mask, the matter has become so serious that the agent has already been separated from his position as the investigations progress.

Meanwhile, the videos accuse that the policeman was screwed up.

“The officer grabbed him, forcibly pulled him by the arm, hit him, and threw him to the ground,” say the testimonies recorded in Metro Indios Verdes. “That is not valid,” commented another person. You must give your name, c @ bron ”, a passenger asks the policeman.

Annoyed people record the video, accuse the violence of the agents at the turnstiles while the subject is injured and lying on the floor.

According to the Chilangas authorities, the Metro medical staff treated the subject and he was diagnosed with an occipital lesion on the left side. Fortunately, he did not require a transfer to the hospital and after a while of relieving himself, he dusted himself off and went home.

“It was in an inconvenient state”: SSC

In a statement, the Secretariat of Citizen Security of Mexico City commented on the case in question.

In addition to notifying that the Metro police – a member of the Banking and Industrial Police – was removed from his post while the statements were being taken, they accused that the entire incident happened due to the bad attitude of the passenger.

They say that he wanted to enter without a mask and was stopped at the entrance of the Metro, “a fact that caused discomfort to the user.”

“Faced with the discussion of the fact and derived from the struggle, the man fell to the ground, which caused a head injury, “ explains the SSC. “It should be noted that, according to the medical assessment, the man was in an inconvenient condition.”