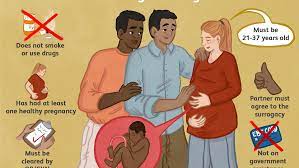 MEXICO CITY – Mexican feminists protested on June 7th, against the Supreme Court of Justice of the Nation (SCJN) because it endorsed surrogacy in the midst of a prolonged and controversial debate.

A group of women, dressed as characters from “The Handmaid’s Tale,” demonstrated against the Supreme Court’s ruling, which last week validated that states may regulate whether a woman can charge for lending her womb or do so “altruistically.”

“By endorsing that women and babies are considered commodities that can be rented or bought, they are turning their backs on us. They are not with our human rights, they are with those who want to commodify our bodies,” said activist Laura Lecuona as she read a letter addressed to the SCJN.

Surrogacy is an arrangement, often supported by a legal agreement, whereby a woman (the surrogate mother) agrees to bear a child for another person or persons, who will become the child’s parent(s) after birth.

The protest occurs while the Supreme discusses the constitutionality of the Civil Code of Tabasco, which in 1997 became the first to legalize the practice, which is only allowed also in Sinaloa, since 2013.

Despite the longevity of the legislation, the Court is only now studying the action of unconstitutionality filed by the extinct PGR after a reform of Tabasco in 2016, with the argument that the states do not have the power to legislate on the matter.

But last week, in the midst of the closing of campaigns for the June 6 elections, the SCJN endorsed both free and paid surrogacy and even invalidated Tabasco’s provisions that prohibited access to same-sex and foreign couples.

However, feminist groups have launched a campaign to pressure the ministers and the president of the Supreme Court of Justice, Arturo Zaldívar, to vote against surrogacy.

Yesterday, at the protest, the demonstrators dressed as characters from “The Handmaid’s Tale”, a novel that portrays a dystopian world in which men only use women as servants and to procreate. “Women are not merchandise, no to surrogacy,” banners read.