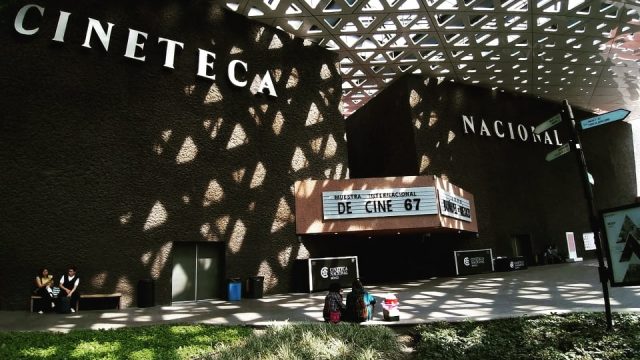 The old military factory in Mexico City will be transformed into a new location of the Cineteca Nacional. Located in a military field with historical value, the 1-F, the industrial warehouse of the old Ensambladora de Armas will be converted into a new cultural reference in the west of the capital, with space for eight movie theaters and recreational areas such as restaurants, terraces, walkways or bookstores. In total there will be 11.8 hectares.

The creation of this new headquarters is part of the project that President Andrés Manuel López Obrador announced in April 2019: the Bosque de Chapultepec Cultural Complex, whose coordination he left in the hands of the artist Gabriel Orozco, and which includes 73.29 hectares of the 1-F military field that the Ministry of National Defense ceded to the city government to be attached as a fourth section of the forest.

To design the intervention plan for this new section, Orozco Félix invited his friend and architect Mauricio Rocha Iturbide, son of the photographer Graciela Iturbide Guerra and the architect Manuel Rocha Díaz, who designed the National Cinematheque of Coyoacán, inaugurated in 1984. In fact, in 2012 Mauricio Rocha himself participated in the remodeling of the National Cinematheque with the design of the Museum of Cinema and the Digital Video Library.

The cost of transforming the Weapons Assembly into the new National Cinematheque is not yet known, but it is known that the work will be carried out during the second half of the year. This new space will not have vaults for the conservation of materials, a digital laboratory for film restoration, a video library, a library, or a gallery. Instead, it will have spaces more oriented to consumption and recreation.

The new facilities will have:

The main problem will be “to convert a confined and controlled space into a public space, so new infrastructures and services that connect through safe and accessible routes must be integrated”, such as the so-called pedestrian streets in Los Polvorines and La Cañada, in the which will be the fourth section of the forest.

The military field, where the old assembly plant is located, is nestled in an area of ​​ravines, with uneven terrain. In fact, it is located in the vicinity of the third section of the forest, where the ravines already begin.

In fact, on April 14, the Ministry of Works and Services of Mexico City received a transfer of 1,280.3 million pesos from the budget originally assigned to the federal Ministry of Culture to carry out the following works:

The military field 1-F has a historical value, not only because it is close to the Old Hermitage of Vasco de Quiroga, built in the seventeenth century, but also because the old Santa Fe Gunpowder and Explosives Factory, originally founded in 1779 and whose current buildings were inaugurated on September 28, 1910, by President Porfirio Díaz, within the framework of the celebrations of the centenary of Independence.

The National Institute of Anthropology and History (INAH) states that “the first gunpowder factory in New Spain was established around 1600 in Chapultepec, but due to the poor conditions in which it was (…) Viceroy Antonio María de Bucareli y Ursúa assigned engineer Miguel Constanzó the task of choosing the place for the creation of a new factory (…) The ravine of the town of Santa Fe (founded by Vasco de Quiroga) was chosen ”.

The Royal Gunpowder and Explosives Factory was completed in 1779 and inaugurated in 1782. By 1810, says the INAH, the factory “had suffered three major fires.” During the independence movement, the factory-supplied gunpowder for the royalist army. In 1852, President Mariano Arista and his minister Manuel Robles decided to lease the factory and it was not until 1910 that it was reopened as a “Smokeless Powder Factory since it had modern machinery imported from Germany”.

To rescue this historical value and as part of the project of the Bosque de Chapultepec Cultural Complex, in the military field 1-F, in addition to the new headquarters of the National Cinematheque, the National Defense Pavilion will also be built, which will be a museum of the site in what was the old Gunpowder Factory and a national art warehouse run by the National Institute of Fine Arts and Literature.