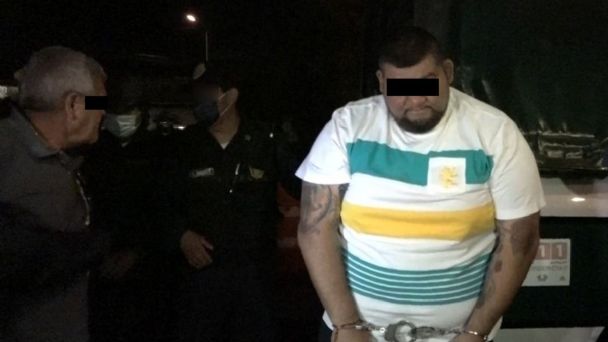 Mario Javier “N”, alias “El Kilos”, probable leader of a criminal cell known by the same name, dedicated to the crime of drug dealing and who is known as an operator of “La Unión Tepito”, was arrested in the Cuahutémoc district of Mexico City, by police officers from the Secretariat of Citizen Security (SSC).

The subject was a priority target of Mexico City Police, as he was identified as a generator of violence dedicated to the sale and distribution of narcotics in the Santa María la Ribera neighborhood.

According to the investigations in this area, “El Kilos” intimidated people by saying that he worked for “La Unión Tepito” with a strong presence in the downtown area of ​​the country’s capital.

The events occurred while the uniformed carried out a security and crime prevention operation on Avenida Ribera de San Cosme, in the Santa María la Ribera neighborhood, and they realized that the driver of a blue car was manipulating what at first glance seemed to be a gun and so they stopped the vehicle.

On Calle Doctor Enrique González Martínez, the car stopped its march, and the crew, four men and one woman, descended, who were required to undergo a preventive search in accordance with police action protocols.

These people were found in possession of 60 blue plastic bags and 45 clear plastic bags containing cocaine. As well as a short firearm supplied with three useful cartridges.

“El Kilos”, has been previously admitted to the Penitentiary System for Crimes against Health in 2016.