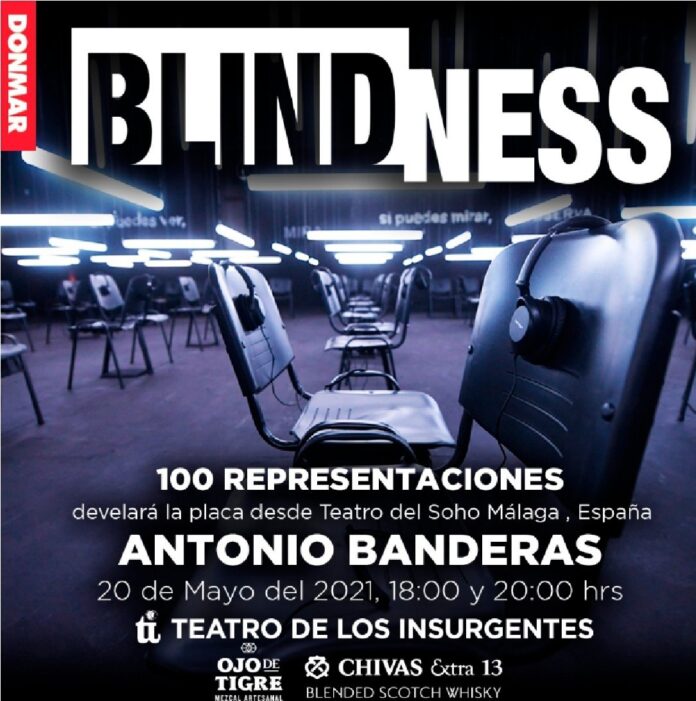 On Thursday night at the Teatro de Los Insurgentes, the unveiling of the plaque was held for the 100 performances of the show “Blindness”, the first in this venue after the theatrical industry stoppage due to the pandemic, for which they had As godfather, from a distance to the Spanish actor Antonio Banderas, with whom the producer Claudio Carrera assures, there are already several projects on the doorstep.

“With Antonio Banderas, we bring several projects to do together in Spain, at the Soho Theater, in Malaga, and in Madrid, but the pandemic was crossed and those projects were on hiatus, today we are resuming them and we have developed a wonderful relationship with Antonio, who is passionate about the theater, needless to say, how great and wonderful he is, but knowing him closely and his passion as a producer, actor and theater director, has only made me admire him more, that is why having several things planning with he has us very excited, “said Claudio Carrera.

If this collaboration takes place, it would be until 2022 when the first montage between Tina Galindo, Claudio Carrera and Antonio Banderas materializes, but for the moment it would only be in Spain in the theater that the man from Malaga directs or on tours throughout the country with one of the montages that Mexicans produce here and with a play that the movie star will also star in.

“As long as they are concrete plans, more can be said, because now yes from plate to mouth …”, said Carrera.
Due to the health contingency, for the celebration of the hundred performances of Blindness, the producer decided to make two red carpets, one for the six o’clock function and the other for the eight o’clock at night, through which various personalities walked, such as Susana Zabaleta, Mariana Garza, producers Rubén Lara and Alejandro Gou, Dominika Paleta, Damayanti Quintanar, Cassandra Ciangherotti, Juan Manuel Bernal, Nailea Norvid, Luis Arrieta, Marcela Girado, Luis Gatica, to name a few.

“One hundred performances in the most difficult times in the history of theater feels good, it is a great pride to be able to say that we gave a hundred performances in the midst of a pandemic, in an economic crisis, and having the Insurgentes Theater open; I can only thank the public, to my partners, José Saramago, the English who gave us the opportunity to reproduce their production in Mexico, Marina de Tavira, it is something we never thought to live and that there is going to be a plaque that Antonio Banderas unveiled, in a moment of history so difficult, today we are leaving this small footprint and this grain of sand to the theater. Today we celebrate that the theaters of the world are beginning to reopen and that is a great joy for all “.

One of the difficulties that Claudio Carrera says they have run into is that people know that the theater is open and working, although it has helped a little with the progress that vaccination of the population has had because now they feel a little calmer and they want to resume their social life.

For those who want to live the experience of “Blindness”, the producer explains that only 100 people enter each show out of a thousand that can fit in the theater because the assembly was designed that way since it was a project created for the pandemic. They do not have a specific date for the end of the season yet, as people continue to attend the 11 functions they have a week.

“It is a privilege that in Mexico City we have the opportunity to have a more avant-garde theater, at this unique moment in the history of humanity that will be unrepeatable, that has been hard and painful, but the theater today in the City and Mexico is at the level of the great theater capitals of the world. “

At the time of the unveiling, the room and the theater stage were completely dark, but suddenly the lights came on and Diego Luna’s voice was heard explaining how the pandemic removed the possibility of the encounter offered by this art, and how This montage reflects the current situation in the world, to later give way to the message that Antonio Banderas sent in audio from Malaga, Spain.

“The theater is a dock to cast our dreams into the sea, to find answers to the questions that this extraordinary moment throws at us, art is always renewed and survives, therefore, I celebrate the audacity of those who have made possible an experience like Blindness and trusted that the audience would return to the theater, I have no doubt that José Saramago’s voice today resonates more intensely than ever, confronts us, shakes us, makes us see as the protagonist of his story that the world cannot even it must exist in the denial of the neighbor.

“The theater connects us in the same space and at the same time, therefore, today I celebrate here the 100 performances of Blindness at the Teatro de los Insurgentes in Mexico City and send a special close hug to its protagonist Marina de Tavira already producers Tina Galindo, Claudio Carrera, Diego Luna, Luis Gerardo Méndez and the entire team in Mexico and London who make this unusual experience possible. Long live Blindness! “, said Antonio Banderas in the recording, as the celebration plate.

“Blindness” is currently presented in New York, Washington, Hong Kong, New Zealand and Mexico, as well as Australia and Spain, which is where they will premiere soon, this latest version will also be produced by Claudio Carrera, Tina Galindo, Diego Luna and Luis Gerardo Méndez; In addition, in New York, there will be some performances in Spanish and the audio that Marina de Tavira made for the assembly at the Insurgentes Theater will be used.