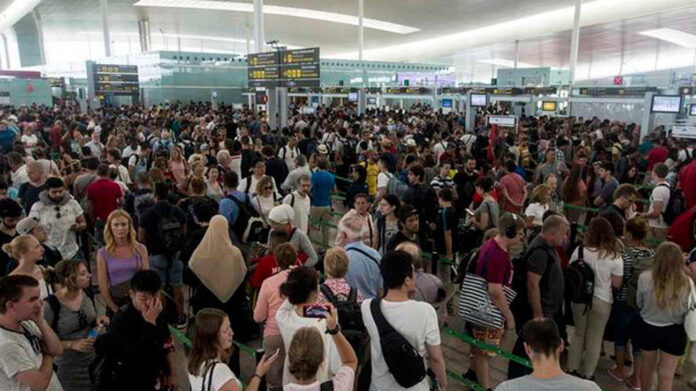 A journalist should not tell personal stories to make a criticism unless it is in the public interest and here we have a case.

In these two years of Covid-19, some air terminals and companies are doing their best to violate the rights of travelers; who, in addition to suffering the discomfort derived from the pandemic, must face other calamities that seem designed by an enthusiast of sadistic practices.

At the Mexico City International Airport, whose CEO is Jesús Rosano, there seems to be a macabre alliance to make life difficult for users of its services.

The security review system that the Eulen company operates has taken pains to create a bottleneck at the entrance to the terminals so that the “healthy distance” is an entelechy that nobody remembers.

Body scanners malfunction and frequently appear on the image of passengers, yellow cards that require a second manual review that can take up to 15 minutes.

Some lounges remain closed, such as the American Express in terminal 2, although the annuities remain; but the worst thing is that there are no notices about it, so cardholders have to make a long and useless walk to one of the most remote points of the airport.

And then there is the creativity of some airline workers, who invent absurd rules such as requiring a return ticket from travelers who go to the United States to document them; perhaps because they have the dream of being hired by the immigration service of that country.

So now that tourism is recovering from the nightmare of the virus, the processes at the most important airport in the country are getting worse.

But the desire to travel does not wane and to board the plane, behind an advertisement for Huawei, there is another for a store called ¡Ay Güey !, which seems like a good humor wink so as not to lose enthusiasm.

Fired. This week José Antonio Rivera, a Mexican tourism figure who held the general management of the Camino Real Hotels, passed away; He commanded the Centro Banamex project and in recent years was Director of Development for AMResorts.

Rest in peace a passionate travel business, who was also admired for his discretion and simplicity.

Bad manners. Antonio Jalife is considered an anti-Zionist analyst, although he tries to entangle his followers so as not to be openly criticized, and he is also one of the few who celebrates the occurrences of Miguel Torruco, the Secretary of Tourism.

Last week, and without saying no water, Jalife slandered Simón Levy who is already preparing a criminal complaint against him.

According to the former Undersecretary of Tourism, this is another indirect attack by Torruco against him and that is that if a bird walks like a duck, nothing like a duck and squawks like a duck because it is surely a duck.