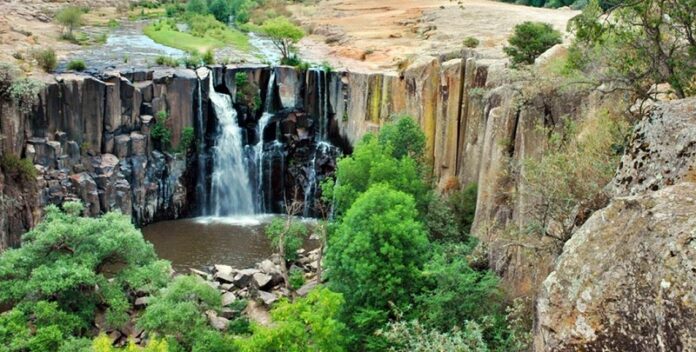 Aculco is a Magical Town nestled between valleys, cliffs, and waterfalls, where daylight filters through the alleys and floods its traditional colonial streets.

Since 2015, Aculco is considered one of the Magic Towns that crown Mexican tourism.

Its natural characteristics make it a sanctuary that encourages travelers to live adventures, camping, rappelling or hiking.

However, the beauty of this town does not culminate in its natural attractions but is maximized by its colonial architecture. So if you want to know what are some of the activities to do in this wonderful town, take 5 minutes to read this article.

This majestic body of water is located in the middle of an arid valley where nature has sculpted a canyon bordered by basaltic columns, where the marvelous 25-meter high waterfall resonates strongly.

And thanks to the basalt rock causeway that huddles the Cascada de la Concepción, the site is ideal for hiking, camping, or mountain biking, which will be spiced up by a spectacular climate, since, according to the official website from the Aculco Town Hall, the territory has mild weather most of the year; however, from November to February temperatures can drop below zero degrees Celsius.

According to the website of the Government of the State of Mexico entitled “Cultural Heritage and Tourism”, within the colonial art of Aculco the Parroquia and the Ex Convent of San Jerónimo stand out, whose “architecture, of European imitation, is a clear example of the American adaptation of the artistic and architectural models of the old continent ”.

In addition, in the central courtyard, you can see a beautiful sundial and in its sacristy, large paintings such as “The Last Supper of Jesus Christ”, by Miguel Cabrera made in 1790, and the “Oil of the Holy Virgin of Guadalupe”.

In fact, if you are an art fanatic, this site is an ideal destination for you, since it has multiple unmissable canvases and oils dating from the colonial era.

Peña and Presa de Ñado, a place with multiple activities

According to the Government of the State of Mexico, in Otomí Peña de Ñado means “Head of Stone” and among the activities that you can carry out in this majestic landscape of Aculco are fishing, camping, horseback riding, mountain biking, hiking, or you can also take a tour on a motorcycle, ATV or 4X4 vehicle.

It is also possible to take a walk in the open air to enjoy nature in this beautiful humid forest.