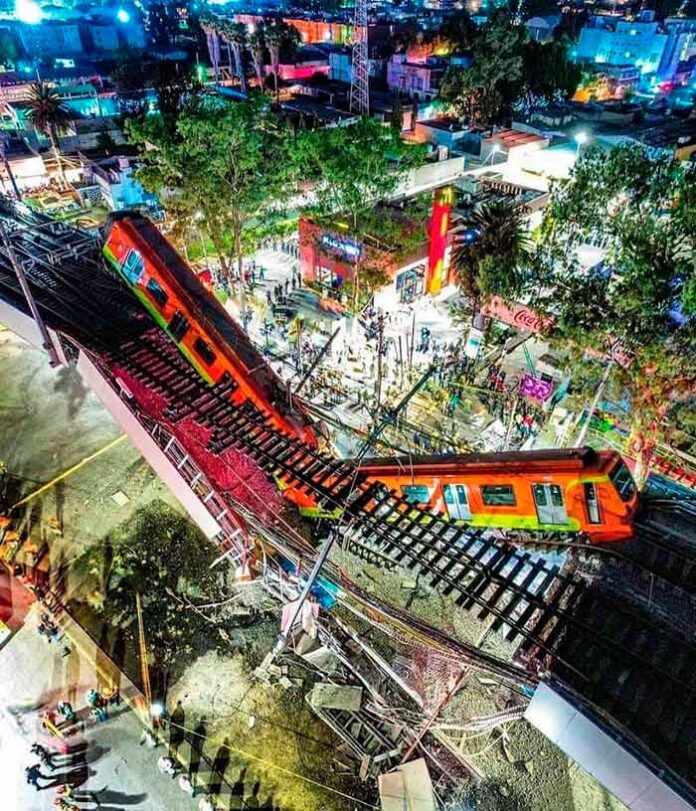 Accident on Line 12: at least 23 dead and 70 injured leaves the collapse of a viaduct at the passage of the metro in Mexico City

At least 23 people died and 70 were injured when a section of an elevated track on line 12 of the Mexico City metro collapsed on Monday.

The head of government of Mexico City, Claudia Sheinbaum, traveled to the scene of the incident, confirmed to the media that 49 of the injured had been transferred to a hospital and announced that an investigation is being carried out to clarify the causes of the happened.

Sheinbaum had pointed out on Twitter that the tragedy occurred after a girder (beam) of the overpass had collapsed and a car had been trapped under the rubble.

He also explained that there are minors among the victims, although he did not specify if they have died or are injured.

The incident occurred around 10 at night between the Olivos and Tezonco stations, in the east of the Mexican capital.

In the recording you can see how the elevated structure breaks when the train passes by, which falls from a height of about 20 meters, and how two wagons are in a “V” shape crashed against the ground.

Rescue workers arrived shortly after and began to open the doors of the cars to try to remove the victims.

The Metro of the Mexican capital is one of the busiest in the world, since it transports about 6 million people from Monday to Friday. Demand is low on weekends.

Citizens have criticized the precariousness of the facilities and the lack of maintenance of an infrastructure that often suffers from interruptions.

Line 12 of the metro, where the accident occurred, also known as “the golden line”, was inaugurated in October 2012 when the current chancellor of Mexico, Marcelo Ebrard, was head of government of the country’s capital .

Almost from its opening, it was criticized for various failures in its operation, which led to the closure of a section of the line only a year and a half after the start of its operations.

The company in charge of making the diagnosis concluded that the line had a series of failures in planning, design and construction that caused stress on the roads and their premature deterioration, which made it necessary to replace a part of the structure and thousands of pieces.

In 2017, the then director of the Mexico City Metro assured that the line “was born with endemic problems that will never be solved in its life” and that it would require maintenance “in a permanent way.”

Months later, neighbors who live next to the elevated part that collapsed this Monday denounced that they feared that the infrastructure could collapse due to cracks and the fall of some pieces of the construction after the earthquake registered that same year, so the area was subject to new repairs.

A few minutes after the accident on Monday, the name of Marcelo Ebrard became the main trend on Twitter in Mexico due to multiple complaints from network users who held him responsible for what happened.

“What happened today in the Metro is a terrible tragedy. My solidarity with the victims and their families. Of course, causes must be investigated and responsibilities defined. I reiterate myself at the full disposal of the authorities to contribute in whatever is necessary,” he wrote Ebrard on Twitter.