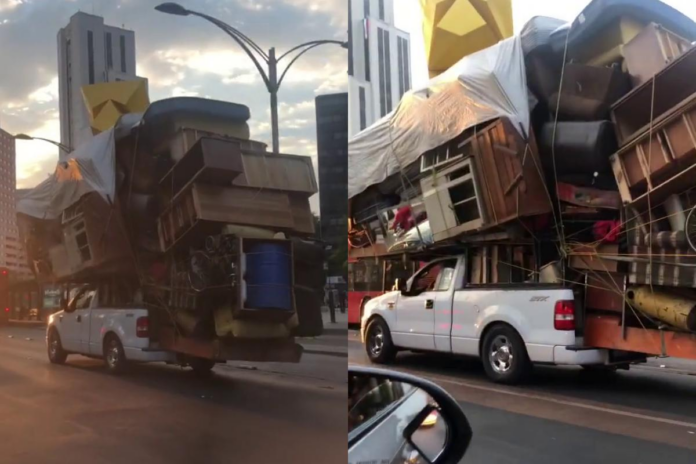 A user of the social network TikTok published a video in which a Ford pick-up of the F series is observed making a move but not in the way we know them.

The video was captured by the user “@lapipadelapaz” on January 6 while she was circulating along Paseo de la Reforma avenue, at the height of El Caballito. We can see the truck loaded with various wooden items, such as tables, cabinets, drawers, and furniture. In addition, other things such as a wheelchair, a gas tank, mattresses as well as mirrors are also appreciated.

The owner of the pick-up even modified the roof of the Ford to make it longer and to accommodate all the furniture and items that he was transporting at that time.

The incredible thing about the matter is that the truck did not have some type of protection or element that would reinforce and protect all the cargo it was carrying. All the furniture and articles that the driver carried on board the pick-up were supported by a canvas, tied to the chassis of the car using ties.

But, the tarp only protected the things that were in the front. The load that traveled in the rear of the vehicle was only supported by ropes that kept things stopped. However, the driver placed a base apparently made of wood under the box door in order to have more space and to prevent furniture and household items from falling to the ground.

The video has already exceeded 188 thousand reproductions and so far it has more than 12 thousand likes.