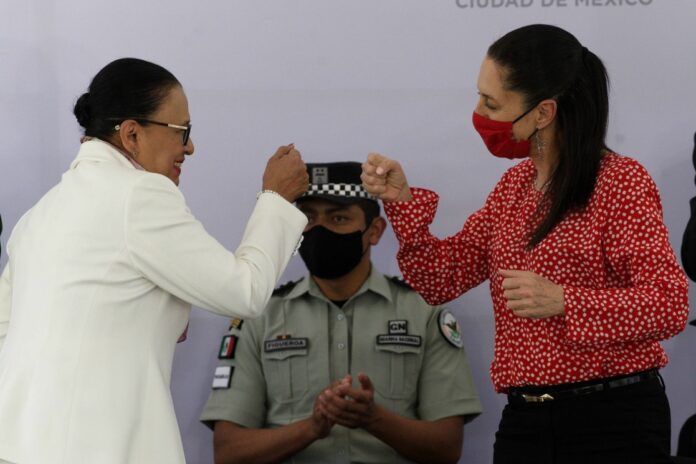 Mexico City. The secretary of Security and Citizen Protection of the government of the Republic, Rosa Icela Rodríguez Velázquez, pointed out that Mexico is the sixth country in the world with the most armed civilians, more than 15 million, according to data from the Institute of High International and Development Studies, with headquarters in Geneva, Switzerland.

“This universe of weapons in the hands of civilians, without adequate control and protection, puts millions of Mexicans at risk and contributes to perpetuating the atmosphere of violence in the country,” he said after accompanying the head of Government, Claudia Sheinbaum Pardo , in the unveiling of the sculpture Molino para la Paz, which was made with the ferrous material of the firearms collected in the capital of the country as a result of the program Yes to disarmament, yes to peace.

In addition to this, he added, it is estimated that a large illicit arms trade is concentrated on the northern border, so it is essential that Mexico and the United States build a secure border.

Faced with this panorama, he expressed that by instructions of President Andrés Manuel López Obrador, said program – which Rodríguez Velázquez designed and implemented in 2019, when he was secretary of the city government – will also be applied in all entities of the country.

He explained that the first states where this strategy will be applied will be those with the highest rates of intentional homicides by firearms, such as Guanajuato, Jalisco, the state of Mexico, Michoacán and Zacatecas, as well as the entities where the governments request it.

Highlighting the results of the program in the Mexican capital, he explained that the Church, the Secretariat of National Defense and civil organizations will participate, as is the case in Mexico City.

Rosa Icela Rodríguez highlighted that in the past five years the violence associated with firearms increased, especially intentional homicide, and according to figures from the Executive Secretariat of the National Public Security System, last year 838 minors died and 609 suffered injuries from firearms, which is why, he said, it is necessary to remove such artifacts from the homes of Mexicans.

The Head of Government, Claudia Sheinbaum, highlighted that the sculpture by the artist Miguel Ángel Campos Ortiz, installed in Paseo de la Reforma Norte, perimeter of the Morelos neighborhood, is intended to send the message that “we want peace in the city and in the country”.

He recognized the work of Rosa Icela Rodríguez at the head of national security, who, he pointed out, is a great woman and an official, and reiterated his support for the President’s policy on the matter, because, he added, it is not only the creation of the Guard National, with which “we fully agree”, but its essence is that to stop the violence, the causes must be addressed.