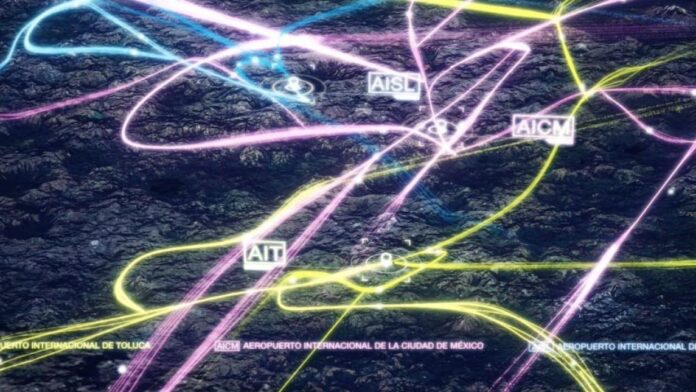 The first phase of the redesign of the airspace in the Valley of Mexico was launched on Thursday, March 25th, and includes operations at the international airports of Mexico City and Toluca, said the Ministry of Communications and Transportation (SCT).

The restructuring of the airspace contemplates the application of Performance-Based Navigation (PBN), which allows aircraft to navigate on more precise, direct, and efficient routes.

According to the International Air Transport Association (IATA), PBN is based on area navigation (RNAV), a navigation method that allows the operation of aircraft on any desired flight path, is In other words, it allows routes to be optimized according to traffic conditions without reducing safety.

According to the SCT, the redesign of the airspace could translate into a reduction of up to 16 percent in the average flight time that they operate in the metropolitan airport system, savings that will also help reduce aircraft fuel consumption.

The International Air Transport Association (IATA) said that the first phase of the redesign of the airspace in the Mexico Valley left it “happy”, as it considered the concerns of the airlines and delayed its implementation to guarantee the safety of operations.

“We are, in general words, happy. It has been a complex development because the Mexican air space is very complicated, but the redesign has been done in a very responsible way, and we hope to see the benefits for the industry, ”said Peter Cerdá, IATA Vice President for the Americas.

At a press conference, the manager in the region specified that the launch of the airspace redesign is the first of many phases, which will progress as other airports are integrated, such as Santa Lucía, which is expected to start operating. in March 2022.

Cerdá added that it will be in the following years when it will be possible to evaluate how effective the airspace redesign is and begin to see the benefits for airlines, which are expected to reduce their fuel costs.

The changes in the airspace, according to simulations carried out by NavBlue, will allow an average reduction of up to 16 percent in the flight time of aircraft operating in the airspace of the metropolitan airport system.

José Ruiz Llorente, IATA director of safety and flight operations for the Americas, pointed out that the Mexican authorities collaborated and allowed to delay the implementation of the redesign, and indicated that from this first day they will begin to collect data to know if safety will be increased and how it will improve the efficiency of air operation.

“It is time to analyze the data that we are going to receive, to see that these increases in safety and efficacy occur, that is going to be one of our main occupations in the coming months, which is one of the priorities, we will be attentive and we will begin to collect data immediately, “said Ruiz this Thursday.

Separately, José Alfonso Lozano, director of corporate affairs for Volaris, indicated that the Mexican authorities did a good job in seeking to optimize the airspace.

“We have seen with great pleasure this redesign of the airspace, the authorities have done an extraordinary job (…) they are looking for how to optimize the airspace, with more operations and more security,” he pointed out during the ‘Dialogues of height’ forum held by A21.

In that sense, Yuri Salinas, director of institutional relations at Viva Aerobús, assured that the changes in the space will help airlines to reduce their costs, be more efficient and encourage the recovery of air traffic to levels prior to the pandemic.

Where to buy ice cream for dogs in Mexico?