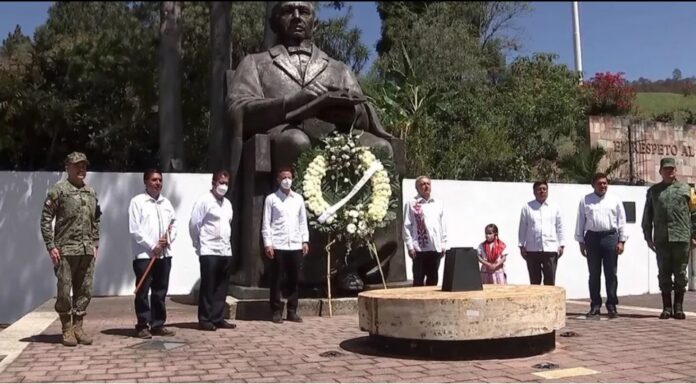 Many times AMLO has recognized Benito Juárez as one of the best presidents Mexico has ever had, and this time was not the exception, where he recalled the great transformation that the president carried out in the country.

“For us, President Juárez is an inspiration and a reference in many aspects, as a defender of sovereignty, as an austere public servant, and as a man who ruled for the people and not for himself,” declared AMLO.

Andrés Manuel indicated that this was the meaning of the so-called Fourth Transformation (Q4), a movement led by the president and that led him to the presidency of Mexico in 2018.

AMLO recalled that his government has been one of the most austere in the modern history of Mexico, taking up the various cuts that have been made to be allocated to social programs that provide economic support to Mexicans.

This was one of López Obrador’s commitments before reaching the presidency, managing to raise the delivery of pensions to older adults in Mexico to constitutional rank.

In this sense, Andrés Manuel endorsed his support and respect for the elderly, who have been given indebtedness and are often looked down upon by society.

It is worth mentioning that all these actions and “austerity” have been severly crticized by many experts that believe AMLO is actually destroying the national economy with bad decisions and leftist populist actions, that the president calls “social programs”.

Finally, Lopez Obrador brought a wreath to the monument of Benito Juárez in Guelatao, accompanied by the authorities present to pay a minute of silence for the former president of Mexico.