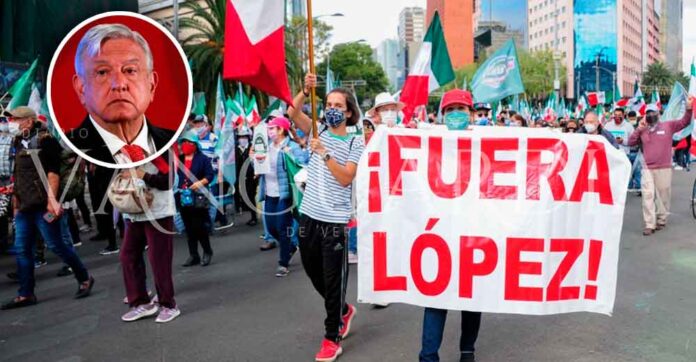 The front accuses López Obrador of being incongruous and authoritarian

Members of the National Anti-AMLO Front (FRENAAA) demonstrated this Sunday, March 21, against the administration headed by Andrés Manuel López Obrador.

“ Out with López, out with López. Out with the dictatorship. Long live freedom ”, were part of the slogans of the attendees, who began to march from the Angel of Independence and advanced on Paseo de la Reforma to the Monument to the Revolution.

This call is aimed at a civil lawsuit against the president that was held on the esplanade of the Monument to the Revolution. According to information from El Universal, the arrival of people who support said movement from other entities is expected.

In social networks, FRENAA highlighted the participation of citizens and shared the following message: ” Brave Mexicans willing to fight for them, for you and for me .” 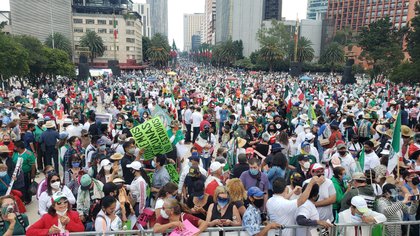 Among the issues that have criticized the current administration are the electricity reform, the fence that the government put up prior to the March u demonstrations, the candidacy of Salgado Macedonio, the mismanagement of the pandemic, among other issues.

It should be noted that last week, FRENAA made the same call in other parts of the country and indicated that trials were held in 75 cities. They have appealed to the phrase that the people must demand from politicians.

Other points made by FRENAA are that López Obrador received priority treatment when he fell ill with COVID-19, they have indicated in their social networks that they had special attention while the rest of the population have suffered to get an oxygen tank.

They have also pointed out the incongruity during his tenure since one of the slogans of the president during his campaign and throughout his administration is to support “the poor first.” According to the members of the political opposition group, the alleged privileges enjoyed by the Chief Executive during his illness are sufficient grounds for a citizen trial. 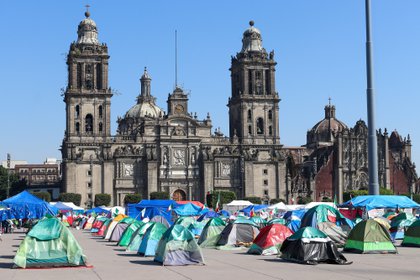 It should be remembered that members of FRENAAA installed a sit-in on Avenida Juárez in September and later continued the protest on the Zócalo grid, a place where they were subjected to ridicule and controversy when videos appeared in which many of the tents were empty. . Even the president mocked the situation during his morning lectures.

On January 30, 150 empty tents were removed from the National Palace. According to the Ministry of the Interior (Segob), the operation was for the purpose of “guaranteeing sanitary measures and preventing infections by Coronavirus, as well as avoiding the stay of people in a street situation or possible conflicts within the camp.”

The agency also pointed out that no person was removed from the Plaza de la Constitución. However, clashes did occur with members of the “Mexico Camp” who intimidated government workers with tear gas and fire extinguishers. Despite this situation, according to the authorities, there was no need for the Secretariat of Citizen Security to intervene to finish removing the tents.