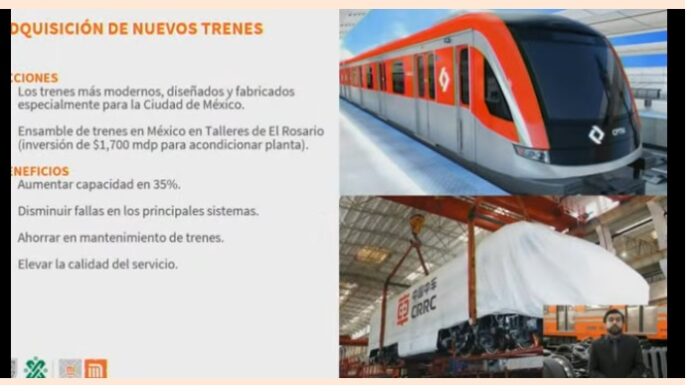 The head of Government of Mexico City, Claudia Sheinbaum, reported that the investment exceeds 41 billion pesos, while the works will last three years.

With an investment of more than 41 billion pesos, the Government of Mexico City presented the new Comprehensive Modernization Plan of the Metro Collective Transportation System (STC).

After a tour of the Zaragoza workshops of the STC, the CDMX Head of Government, Claudia Sheinbaum Pardo, explained that since the beginning of her administration the construction of new lines for the Metro was ruled out, but instead, she opted for a plan that will seek the modernization of a part of its infrastructure.

“At that time, we talked about three priority projects: one, the project to modernize the Red Eléctrica, particularly Line 1; second, the modernization of Line 1, including its operating scheme and new trains; and three, some other actions such as escalators, stations, etc., which required more maintenance ”, Sheinbaum recalled.

However, she reiterated that due to the fire in the Buen Tono substation , which occurred at the beginning of this year, the decision was made to generate a new plan that would include a greater amount of investment and that would cover a large part of the Metro system.

“From the incident we had in the Metro in January 2021, we made the decision not to commit the same mistakes. The goal is to deliver something much better than what we found. Not only because of the age of the transformers and electrical installations, but we had to completely renovate something that was designed 55 years ago, into something completely new, completely different and better, ”said the official.

On this new plan, he announced that a collaboration agreement will be signed with the Federal Electricity Commission ( CFE ), in addition, Sheinbaum informed that the works and works will be developed for a period of three years, which will begin from 2021.

Of the projects that will be developed, she specified that the High Voltage Electrical Substation (SEAT) “Buen Tono” will be built and will be connected to the most robust energy system in the country, the 230 kilovolt ring.

“It is a titanic work (…) It is as if we set out to supply electricity to a city the size of Villahermosa; and that we do, together, CFE and the Mexico City Metro, and the resources come from the resources of the budget of the Government of Mexico City ”, she highlighted.

Sheinbaum Pardo indicated that this new plan includes the comprehensive modernization project for Line 1, which runs from Pantitlán to Observatorio, as well as its 17 substations.

Additionally, she informed that a 1,200-kilometer 15-kilovolt medium voltage cable will be laid to reach Lines 1, 2, and 3, “which is equivalent to a distance between Mexico City and McAllen, Texas, United States.”

“This year we are going to make an investment of 1,700 million pesos; the following year it will include the wiring to Line 1 and the change of transformers; and the third year, the completion of this project for Line 1 and progress for Line 3, ”he said.

Regarding Line 2 , the mayor of Mexico City explained that the project will be changed in the future to change 377 kilometers of wiring, five substations, equipment and traction wiring, as well as its traction logic.