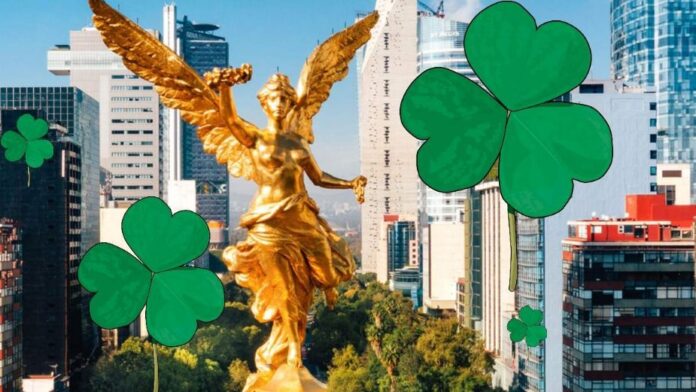 In order to celebrate 17 March, Mexico is participating for the eighth time at the initiative of the Global Greening, and again the Angel of the Independence of the City of Mexico will turn green, traditional color of Ireland.

New sites are added such as the Parroquia de San Miguel Arcángel, in San Miguel de Allende, and in Mexico City, the headquarters of the Ministry of Foreign Affairs, the Local Congress, the Building of the Jewelers, and the Gran Hotel de la Ciudad de México, the Old Government Palace, the Grand Hotel of Mexico City and the Petroleos Fountain, among others.

This year, the Palm Fountain, in Dubai: the largest fountain in the world, and the Costanera Tower in Chile, which is the tallest building in South America, were added to the Global Greening 2021 and are added to the set of sites and buildings that have participated in other years as the Sydney Opera House; the Chinese Wall; the Empire State Building in New York; the Christ the Redeemer, in Rio de Janeiro; The Tower of Pisa in Italy; the London Eye, and Niagara Falls, in London and Canada.

From the city of Brussels to the capital Buenos Aires, Argentina, and from Sydney to San Francisco in the United States, hundreds of places around the world will host the Greening 2021 in which buildings, historical sites, or significant for the culture of the world they will glow green.

At the virtual press conference for the launch of “Global Greening” 2021, in alliance with the Embassy of the Republic of Ireland in Mexico, Diana Alarcón, coordinator of Advisors and International Affairs; the Secretary of Culture, Vannesa Bohórquez; as well as Sarah Callanan, Chargé d’Affaires of the Irish Embassy in Mexico; Beatriz Perea, Coordinator of Liaison with the Government of the Embassy of Ireland in Mexico; Bernardo Aguilar, general director for Europe of the Ministry of Foreign Relations; Ana Rita Lascurarin, director of the Museo del Chocolate 7 and Alfonso Miranda Márquez, director of the Museo Soumaya.