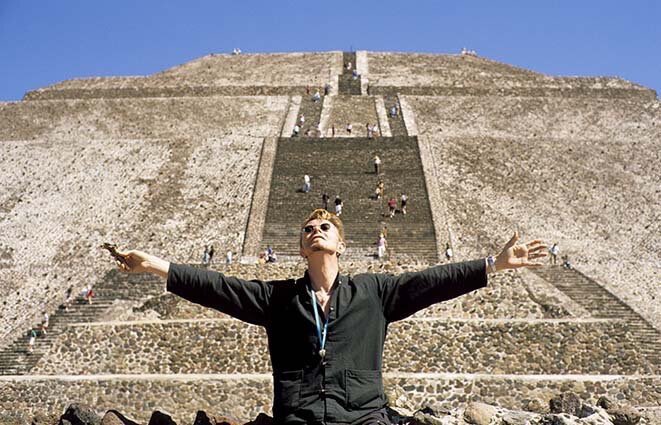 David Bowie visited “Palacio de Bellas Artes” and fell in love with it.

“I was so happy in Mexico,” Bowie said.

On his tour, the British superstar was accompanied by Mexican photographer Fernando Aceves, who was in charge of shooting the iconic images of David Bowie along with the murals of Diego Rivera, Rufino Tamayo, and Frida Kahlo.

MEXICO CITY (WEDNESDAY, MARCH 3, 2021) The legendary and chameleonic British musician David Bowie visited Mexico City to offer a concert in October 1997. It was an atypical visit, as the musician decided to visit some of the most emblematic sites of the Mexican capital, where he took the opportunity to take a series of photographs that would become emblematic of Bowie’s career.

On his tour, the Briton was accompanied by Mexican photographer Fernando Aceves , who was in charge of taking the iconic images of David Bowie along with the murals of Diego Rivera , Rufino Tamayo or Frida Kahlo . On this journey, ‘the man who fell to earth’, also had the time to go to the archaeological zone of Teotihuacán where other legendary photographs were recorded.

After his visit to the country, the creator of albums such as ‘ The rise and fall of Ziggy Stardust and the spiders from Mars ‘ or ‘ Young Americans ‘ gave an interview where he gave his impressions of this performance. ” I was too happy in Mexico ,” said David Bowie, who had performed on October 23, 1997 at the Foro Sol , a venue that had only recently been conditioned to host musical concerts.

Bowie falls in love with Mexico

Upon arrival in the City of Mexico, David Bowie was intercepted by some fans who gathered at the Four Season Hotel, where he stayed, hoping to get an autograph or a snapshot, but they were stopped by security guards. It is rumored that Bowie was a fan of the works of the muralist Rufino Tamayo, considered one of the greatest exponents of this artistic movement.

Fernando Aceves accompanied the British musician during his tour of the murals of the Palacio de Bellas Artes , the National Palace , the Museum of Anthropology and History and the pyramids of Teotihuacán . Until the day of his death, David Bowie remembered Mexico thanks to the wide variety of cultural offerings it offers. Without a doubt, the musician’s visit was a watershed in the shows held in our country.

The good vibes that Bowie received in the Mexican capital were reflected in the concert he offered at the Foro Sol, entitled ‘ Earthling ‘. With a list of songs that were absent from the greatest hits, but that mattered little to the Mexican fans. The so-called ‘ Camaleón ‘ took the stage after an opening by Mexican band Control Machete and then Erasure, another British group that was very well known by the Mexican public.

To the Conquest of Aztec Lands

The concert opened with ‘ Quicksand ‘, and continued with ‘ Jean Genie ‘, from one of his most acclaimed albums: ‘ Aladin Sane ‘ from 1973. Later, he performed ‘ I’m Afraid of Americans ‘, which was the promotional single for ‘ Earthling ‘, a moment that made the audience stand with the intention of not lowering the rhythm or the mood at any moment of the recital.

David Bowie appeared on stage wearing his iconic Union Jack trench coat, which he had used on the album cover. The setlist continued with rarities such as ‘ Panic in Detroit ‘, ‘ Look back in anger ‘ and ‘ Strangers when we meet ‘, which come from classic albums by the British musician, but do not represent songs that are known to most people. For fans of red bone, this was insanity.

However, the best came at the end with the interpretation of ‘ The man who sold the world ‘, ‘ Under pressure ‘ (which was a hit with Queen), and ‘ Fame ‘. There was no more and in this way, David Bowie’s only visit to Mexico ended. He never returned to Aztec lands, but one time was enough to make him fall in love with the cultural variety of one of the most cosmopolitan cities in the world.